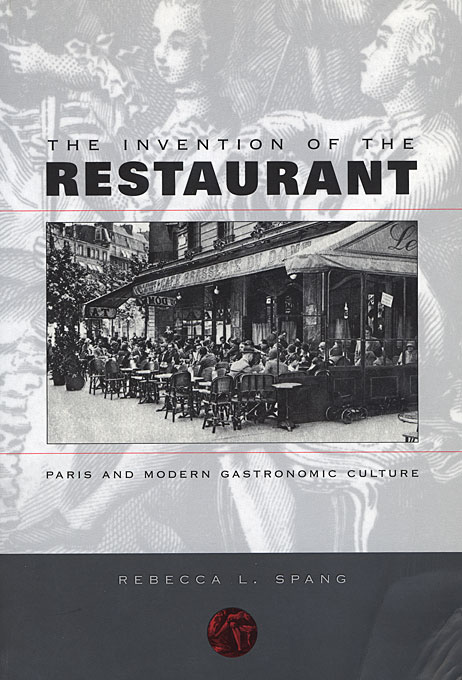 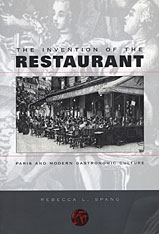 The Invention of the Restaurant

“Spang has written an ambitious, thought-changing book. Until now, most restaurant history was pop history, filled with canned ‘Eureka!’ moments and arch legend-making… Spang’s book is an example of the new ‘niche’ history, and, like the best of such books, it is rich in weird data, unsung heroes, and bizarre true stories about the making of familiar things.”—Adam Gopnik, The New Yorker

“[A] pleasingly spiced history of the restaurant… How has [the] restaurant ritual come to be? And why does it have this form? Such questions are now familiar in works of cultural and social history…[but] Spang adds to the genre without falling prey to its jargon.”—Edward Rothstein, The New York Times

“This prize-winning academic historical study is a lively, engrossing, authoritative account of how the restaurant as we know it developed… Rebecca Spang is consistently perceptive about the semiotics of her theme, and as generous in her helpings of historical detail as any glutton could wish.”—The Times

“No more fables about ancien régime chefs, whose aristo patrons had been guillotined or exiled in the French Revolution…an end to those anecdotes about their invention of dishes broiled on a breastplate on some Napoleonic battlefield. Because Spang reveals the restaurant’s first true author: Mathurin Roze de Chantoiseau, ‘friend of all the world,’ an entrepreneur who edited an annual business directory in which he recommended himself as the ‘king’s restauranteur’ and founder of the first ‘house of health.’”—Vera Rule, The Guardian

“Almost every page of this decidedly scholarly though highly readable book gave me something to think about: the origins of restaurant reviewing in the early years of the 19th century, the way in which other Europeans came to identify the restaurant with the essence of French-ness itself, or the fact that in French one word—carte—does double duty for both menu and map.”—Michael Gora, The Boston Sunday Globe

“The perfect book for a time of year that celebrates, among other things, food. Historian Rebecca Spang begins with an inspired question: Why are there restaurants? To answer this, she takes the reader back a couple of centuries to France, when a restaurant was actually a thing to eat and not a place to go. Her well-researched, compelling book deservedly won several awards.”—The Globe and Mail

“Readers hungry for mouth-watering accounts of sumptuous meals or paeans to the glories of French cuisine will not find them here. Spang’s focus is on the restaurant as an institution, and her history pretty much ends in the mid-19th century. Spang is far more interested in viewing restaurants in a wider social, political, and historical context. Her book is well…argued, dryly witty, and full of fascinating details.”—Merle Rubin, The Los Angeles Times

“Spang writes entertainingly, with a keen sense of humor and with no great reverence for her subject. It is a refreshing contrast to much of the overwritten adulation of restaurants that passes for criticism today.”—Roger Harris, The Newark Star-Ledger

“The title of Rebecca L. Spang’s scholarly yet highly accessible social history, The Invention of the Restaurant, causes a small jolt of surprise. For people who eat out so often that boiling a pot of spaghetti at home is a special occasion, a world without restaurants is hard to imagine. We realize, at some level, that they have not always been here, but few of us could say who invented them, or when… Much of this information is ignored in the standard food histories, and Spang’s excavation of it makes for interesting reading, particularly because the French Revolution and its aftermath would change restaurants almost beyond recognition, into something very like the places where we go out to eat today.”—Pete Wells, Salon

“Spang presents her story as an excursive and discursive feast, seasons it with wit and gentle irony, lards it with cameos, quotations, and illustrations. Her appetizing message is served with a deft touch.”—Eugen Weber, American Historical Review

“Why do restaurants exist? Why do we go to restaurants? Reading Rebecca Spang’s Invention of the Restaurant: Paris and Modern Gastronomic Culture does not directly answer these questions on a personal level, but it does, with many insights, help illuminate the history and sociology of eating out… Spang’s book, while thoroughly researched, is highly readable and enjoyable. This French Revolution of the table will obviously interest amateurs and professionals of culinary topics. I would argue, though, that the book should intrigue even more many readers with no knowledge or particular love of the kitchen. Because every chapter is well introduced and focuses on a particular aspect of the restaurant, such varied fields of study as sociology, history, economy, science, literature, and law find their place. As a result, the book will appeal to many types of readers including undergraduates and graduates. Of special interest is the way Spang considers the public-and-private-sphere debate as well as her unique approach of the French Revolution. Her analysis is accomplished in great detail—starting with the various definitions of the evolution of the word ‘restaurant’—and includes many frontspieces, caricatures, and copious notes. Finally, Spang’s book is an engaging portrait and a serious but accessible tool for understanding the metamorphosis of the emerging modern French society. The Invention of the Restaurant deserves to be read by all.”—Veronique Olivier-Wallis, Eighteenth-Century Book Reviews Online

“By focusing on the development of gastronomy as a discourse, and by analyzing that discourse’s constitutive claims to autonomy, Spang offers a more nuanced understanding of what makes her study important and new, if not revolutionary… With its engaging prose style and its judicious use of both scholarly apparatus and illustrations, the book is reminiscent of the work of John Brewer and Simon Schama (not coincidentally, since the latter was Spang’s thesis director). Offering both a detailed history of the emergence of the restaurant and an introduction to the major cultural and political movements of the revolutionary era, The Invention of the Restaurant spans the period from 1770 to about 1840.”—Jody Greene, Eighteenth-Century Studies

“It is by now hardly necessary to point out that this is an excellent book. Rebecca Spang’s Invention of the Restaurant well deserves the prizes and enthusiastic reviews it has garnered from both academic and non-academic sources since its appearance in 2000. The reasons for these successes are easy to discern. Spang’s book is delightful to read, beautifully constructed and concerned with a topic of immediate appeal: how and why was the restaurant invented? …A splendid work showing considerable erudition and great narrative talent. I look forward to reading Spang’s next publication.”—Rebecca Earle, French History

“This is a book that works on a number of different levels. There is meat and drink here for those interested in the metaphysical and metaphorical aspects of eating; a wealth of erudition on some relatively little studied aspects of Enlightenment culture and the French Revolution; and those scholars of the period who follow convention in regarding the rise of the French restaurant as epiphenomenon of the French Revolution, a well presented challenge to their account.”—Kate Soper, Radical Philosophy

“Spang chronicles these developments [in the history of restaurants] in a tasty work, which is about far more than food.”—Harvard Magazine

“Spang traces [the] history [of restaurants] and challenges the traditional gastronomic narrative of dining out in the French capital… Spang’s work should appeal to readers seriously interested in the social and intellectual history of dining out.”—Mary Carroll, Booklist

“A deeply gratifying social history of the Parisian public food world, as multilayered and earthy as pot-au-feu, for all its scholarship, as agreeably informal as a bistro.”—Kirkus Reviews