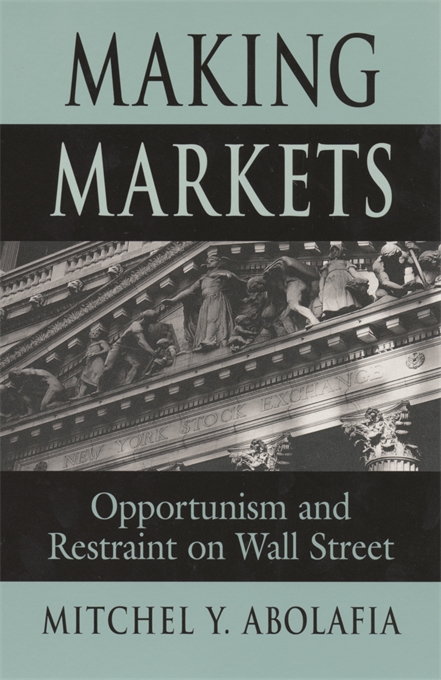 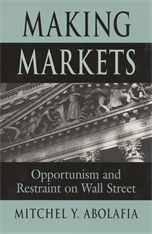 Opportunism and Restraint on Wall Street

In the wake of million-dollar scandals brought about by Michael Milken, Ivan Boesky, and their like, Wall Street seems like the province of rampant individualism operating at the outermost extremes of self-interest and greed. But this, Mitchel Abolafia suggests, would be a case of missing the real culture of the Street for the characters who dominate the financial news.

Making Markets, an ethnography of Wall Street culture, offers a more complex picture of how the market and its denizens work. Not merely masses of individuals striving independently, markets appear here as socially constructed institutions in which the behavior of traders is suspended in a web of customs, norms, and structures of control. Within these structures we see the actions that led to the Drexel Burnham and Salomon Brothers debacles not as bizarre aberrations, but as mere exaggerations of behavior accepted on the Street.

Abolafia looks at three subcultures that coexist in the world of Wall Street: the stock, bond, and futures markets. Through interviews, anecdotes, and the author’s skillful analysis, we see how traders and New York Stock Exchange “specialists” negotiate the perpetual tension between short-term self-interest and long-term self-restraint that marks their respective communities—and how the temptation toward excess spurs market activity. We also see the complex relationships among those market communities—why, for instance, NYSE specialists resent the freedoms permitted over-the-counter bond traders and futures traders. Making Markets shows us that what propels Wall Street is not a fundamental human drive or instinct, but strategies enacted in the context of social relationships, cultural idioms, and institutions—a cycle that moves between phases of unbridled self-interest and collective self-restraint.