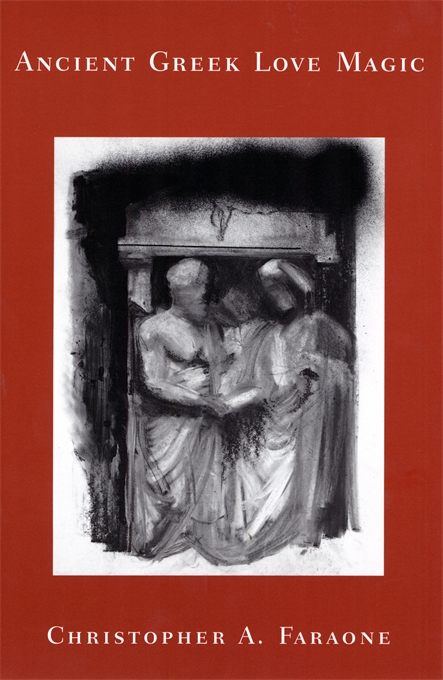 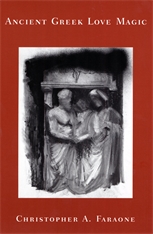 “Christopher Faraone’s masterly Ancient Greek Love Magic [is] an always intriguing—and often disturbing—exploration of ancient erotic society. Faraone, an established expert on ancient magic and ritual, examines the evidence for the two most-widely practiced types of love magic: agoge spells, which lasso even the most ornery of love-objects and philia spells, which prevent your significant other from searching for greener pastures elsewhere… Faraone’s analysis of the interplay of gender and magic will be the book’s most important contribution; although agoge magic is usually practiced by males and philia magic by females, the exceptions (and there are some) point to the paradoxes inherent in Ancient Greek constructions of gender… The book is a veritable encyclopedia of fascinating magical recipes, and boasts many well-researched variations on agoge and philia charms.”—Thomas Jenkins, Boston Book Review

“This is no dry tome or unimaginative catalogue of papyrus scraps and voodoo ‘poppets’. The dust-jacket promises a lucid analysis of the large corpus of ritual teachings used by the Greeks to instill or maintain various forms of desire and affection. Faraone delivers the goods, focusing principally on interpersonal aphrodisiac magic: though he does touch briefly on self-help potency spells, he is more interested in those directed against another unconsenting individual.”—Lea Chambers, Joint Association of Classical Teachers Review

“If any scholar is well-placed to produce a book on the topic of ancient Greek love magic, it is certainly Christopher Faraone… A useful glossary, full bibliography, and indispensable index of terms, and an index of passages from the ancient authors, round out the volume. This is without doubt a definitive work… Packed with information. But, more importantly, it contains critical insights and interpretations which show that Faraone is master of his subject.”—Mathew Dillon, Scholia Reviews