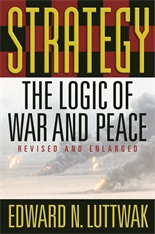 The Logic of War and Peace, Revised and Enlarged Edition

“If you want peace, prepare for war.” “A buildup of offensive weapons can be purely defensive.” “The worst road may be the best route to battle.” Strategy is made of such seemingly self-contradictory propositions, Edward Luttwak shows—they exemplify the paradoxical logic that pervades the entire realm of conflict.

In this widely acclaimed work, now revised and expanded, Luttwak unveils the peculiar logic of strategy level by level, from grand strategy down to combat tactics. Having participated in its planning, Luttwak examines the role of air power in the 1991 Gulf War, then detects the emergence of “post-heroic” war in Kosovo in 1999—an American war in which not a single American soldier was killed.

In the tradition of Carl von Clausewitz, Strategy goes beyond paradox to expose the dynamics of reversal at work in the crucible of conflict. As victory is turned into defeat by over-extension, as war brings peace by exhaustion, ordinary linear logic is overthrown. Citing examples from ancient Rome to our own days, from Barbarossa and Pearl Harbor down to minor combat affrays, from the strategy of peace to the latest operational methods of war, this book by one of the world’s foremost authorities reveals the ultimate logic of military failure and success, of war and peace.