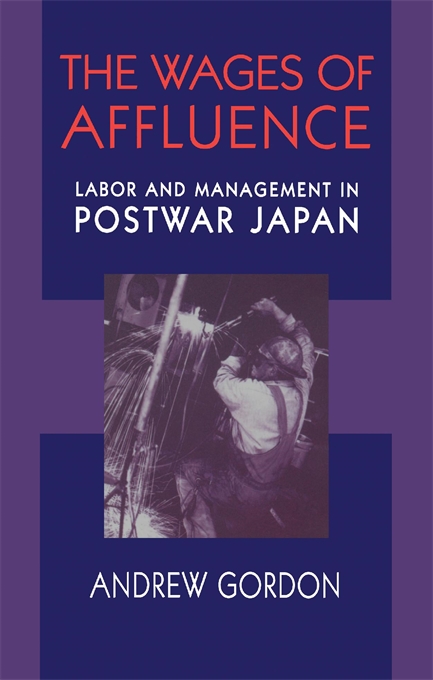 The Wages of Affluence

Labor and Management in Postwar Japan

Andrew Gordon goes to the core of the Japanese enterprise system, the workplace, and reveals a complex history of contest and confrontation. The Japanese model produced a dynamic economy which owed as much to coercion as to happy consensus. Managerial hegemony was achieved only after a bitter struggle that undermined the democratic potential of postwar society. The book draws on examples across Japanese industry, but focuses in depth on iron and steel. This industry was at the center of the country’s economic recovery and high-speed growth, a primary site of corporate managerial strategy and important labor union initiatives.

Beginning with the Occupation reforms and their influence on the workplace, Gordon traces worker activism and protest in the 1950s and ’60s, and how they gave way to management victory in the 1960s and ’70s. He shows how working people had to compromise institutions of self-determination in pursuit of economic affluence. He illuminates the Japanese system with frequent references to other capitalist nations whose workplaces assumed very different shape, and looks to Japan’s future, rebutting hasty predictions that Japanese industrial relations are about to be dramatically transformed in the American free-market image. Gordon argues that it is more likely that Japan will only modestly adjust the status quo that emerged through the turbulent postwar decades he chronicles here.