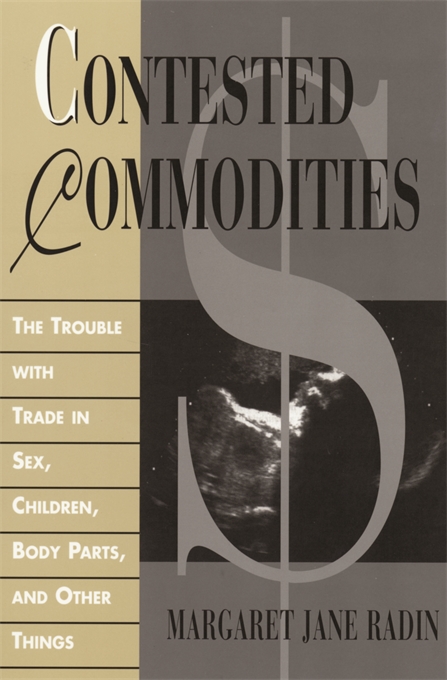 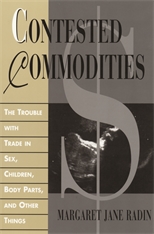 “In this thought-provoking book Margaret Jane Radin asks us to consider whether there are some areas of social life which should be off-limits to the market, and whether some human interactions should be exempted from market-style forms of description and analysis. Although Radin is not the first theorist to address these issues, her eloquently written book contains some of the most sophisticated treatment they have received thus far. She convincingly makes the point that unless we transcend those models of human behaviour which characterize all human interactions as market exchanges, we may find ourselves unable to engage in the forms of valuing required for the maintenance and promotion of a humane society...The book represents a significant contribution to debate about the role of markets and market ideology in modern democratic polities. Future discussions of these issues will undoubtedly be influenced by Radin’s work.”—A. J. Walsh, Philosophical Quarterly

“Margaret Radin asks, why not put everything up for sale? Her answer is that doing so would impair human flourishing by compromising the social contexts needed for personhood. She offers a general approach to determining the ethical limits of markets and shows how it works in cases ranging from organ sales, prostitution, and commercial surrogate motherhood to the ’free marketplace of ideas,’ compensation in torts, and public choice theories of democracy. Radin’s contributions to this controversy are consistently illuminating and through provoking...For anyone interested in the ethical limitations of markets, this book is required reading.”—Elizabeth Anderson, Ethics

“What does it say about us, and what does it do to us, when we talk about people as commodities to be traded in the market? Radin’s profound, subtle, and disturbing book asks how the texture of our human world may be altered by ways of speaking and thinking, apparently innocuous and nicely scientific, that we import from market economics and use to characterize non-market behavior. A distinguished writer about property law, Radin avoids facile answers and stresses the complexity of the issue. Nonetheless, she leaves her reader with a warning: the models we use shape the people we may become. One day we may find to our grief (or, worse still, lack of grief) that our intellectual inventions have reinvented our world.”—Martha Nussbaum, University of Chicago

“Professor Radin has brought very considerable intellectual courage and perspicacity to bear on one of the most vexing and central issues in any liberal, market-based society--where should the market (and market rhetoric) end, and politics begin in the allocation of scarce resources? Law and economics scholars, who more or less assume the virtues of the private market, in most contexts, will be especially challenged by Radin’s anlysis. Her book is also beautifully written and displays an elegance and lucidity that is absent in much modern legal scholarship.”—Michael J. Trebilcock, University of Toronto

“At a time when belief in markets is ascendant throughout the world, Contested Commodities challenges--at the most fundamental level--the very idea of exchanging things for money. Margaret Jane Radin’s arguments are subtle and nuanced, and her central claim about the potentially dehumanizing effects of exchange is powerful and important. No one in recent decades has made this case against the dominance of markets as well as Radin.”—David Strauss, University of Chicago