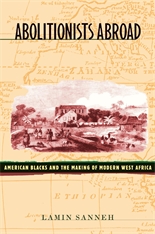 American Blacks and the Making of Modern West Africa

“In his most recent work, Lamin Sanneh offers a novel perspective on nineteenth-century antislavery movements. Instead of the usual narratives of William Wilberforce in England or William Lloyd Garrison in America, Sanneh tells of the vital role Africans—albeit often Americanized or Anglicized Africans—played in the abolition of slavery both on their own continent and around the globe… Sanneh’s narrative poses some of the broadest and most important questions in the history of global colonization and modernization. Should we agree with him that the imposition of Western liberal cultural values and social organization in Africa—when these values were promoted by Africans themselves—was unambiguously a good thing? Should the entire world therefore be made over in the image of the United States with its notion of individual rights?”—Stewart Davenport and Wiebe Boer, Books & Culture

“Sanneh focuses on the colonization or ‘back to Africa movement’ as an outgrowth of the abolitionist-antislavery movement… [He] recounts the experiences of the black abolitionists to illustrate the conflicts and cross currents in the slave trade debate that are not generally discussed… Sanneh’s work reflects the conflict of Christian values with domestic politics, which provided the opportunity for black Americans to influence the development of modern West Africa.”—Vernon Ford, Booklist

“Sanneh argues that modern antislavery in Europe and America emerged from an evangelical Christianity centered on personal salvation that empowered a bottom-up social movement of ex-slaves, ex-captives, and their allies. These downtrodden outcasts created an ‘antistructure’ in the form of an alternative community that broke old structural traditions as best illustrated by the Sierra Leone colony created by blacks displaced during the American Revolution. There, Sannah argues, a new society based on freedom and human dignity formed a foundation for modern West Africa.”—Thomas J. Davis, Library Journal

“In this absorbing study, Sannah argues for the historical significance of the settlement in Freetown, West Africa, established by nearly 1,200 freed slaves in 1792 as the foundation for a powerful anti-slavery movement that influenced social policy in both America and Europe. Using journals, letters and other evidence gleaned from public records, he shows that freed slaves and former captives such as Olaudah Equiano, David George, Paul Cuffee and others believed that abolitionist sentiment, together with Christianity, with its theme of God-giving humanity, could become an effective liberating force… This well-documented book offers sharp historical insights on an important but often neglected chapter in the history of American slavery.”—Publishers Weekly