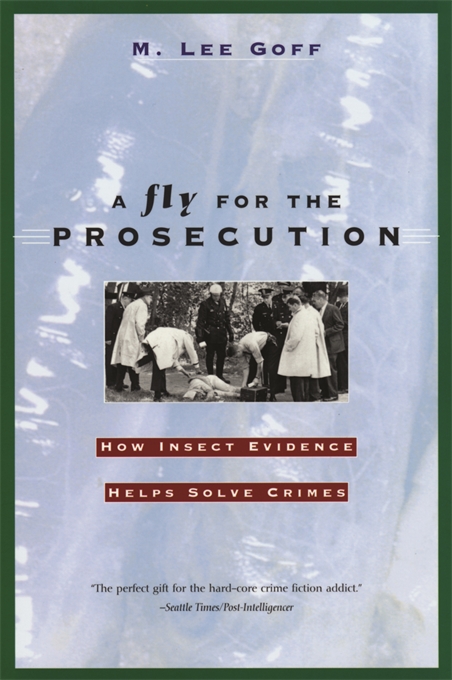 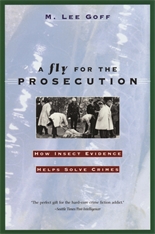 A Fly for the Prosecution

“Seductive… Goff is a forensic entomologist, and he tells the story of what exactly that means and of how his field (which hardly existed before 1980) came to take a respected place in death investigations. Along the way, he provides a small hive of entomological tales… Goff, a marvelously vivid and clear explainer of his science…uses plenty of true-life (or rather true-death) cases to show how it’s done. The tales can be riveting.”—Atul Gawande, The New York Times Book Review

“Goff takes you into the world of the forensic entomologists: the intrepid band of insect experts around the world who turn their intimate knowledge of creepy crawlers to the service of police work… A fascinating read… Great, gory stuff. Goff seems like just the sort of gifted storyteller you’d want to have a drink with—but, perhaps, not dinner.”—John Schwartz, The Washington Post Book World

“A dead body is fertile ground for distinct waves of insect populations to inhabit… The succession of insect occupation of the body gives important clues to the post-mortem interval, and acts as a forensic clock which can provide often incriminating evidence in a murder case… The right sort of person to put together this unsavory combination of criminology and natural science is M. Lee Goff…[whose] book on the subject is the first of its kind. In it, Goff describes how insect evidence helps solve crimes and convict perpetrators… Behind each story is a lesson in forensic entomology… Goff is not your everyday academic. He is bohemian, alternative, bold; a true biologist, he is observant and involved… But he is also very human.”—Nasim Mavaddat, The Times Literary Supplement

“‘The suspect was convicted of second degree murder and the major witnesses were flies.’ With these words entomologist Goff introduces his somewhat exotic specialty: forensic entomology…[which] assists criminal justice…by providing clues about how a body may have been moved after death, by placing a suspect at the scene of a crime, and by showing that drugs or toxins have contributed to a death. Goff…traces the development of his field from modest beginnings to its present wide acceptance as an adjunct of detective work and criminal trials.”—Scientific American

“Although forensic entomology has a certain fascination for the public, any forensic pathologist will tell you that it is much more entertaining to read about cases than to collect live arthropods from decaying human corpses. This is where Goff’s book comes in—[it’s a] colourful collection of forensic entomology research and cases (mostly in his own Hawaii), along with personal thoughts about how to deal with violent death and decay.”—Mark Benecke, Nature

“A murder mystery, set in Hawaii, starring an entomologist? Sounds too good to be true, but open A Fly for the Prosecution and ready yourself for finding out which flies land on corpses within 10 minutes of death, and how many days it takes their larvae to pupate. M. Lee Goff, one of the world’s handful of forensic entomologists, helps to solve crimes by fixing—with remarkable accuracy—times of death. An entertaining tale of blowflies and blister beetles.”—New Scientist

“A new breed of forensic scientists has discovered that they can actually solve crimes by studying the insect demolition crew that dismantles the human body after death. While the fauna in this book might not be everyone’s cup of tea, for others of us, A Fly for the Prosecution, by M. Lee Goff, is deliciously disgusting. You’ll find out that maggots aren’t alone—a veritable Cosa Nostra of creepy-crawlies gather at the scene of the crime, from hide beetles to wasps to ants, each with a special role to play as the body decomposes.”—Vicki Croke, The Boston Globe

“I planned to leaf through the book, then read it in earnest the next day. But the opening paragraph grabbed me: ‘It was a perfect morning for shoreline fishing and throwing nets for crabs. The sun was shining brightly and the air was perfumed with the scent of plumeria when three fishermen set off for Pearl Harbor… Peering over the fence in the direction of the stench, one spotted a dead body lying on its back.’ Goff had me hooked.”—Elaine Masters, The Honolulu Advertiser

“Overall, Goff has written a good book about a fascinating and fairly new subject. Especially for crime buffs and science buffs, this book is quite engrossing—as long as you aren’t grossed out by a few flies, maggots, beetles and other crawling critters.”—David Bloomberg, The Springfield State Journal-Register

“[This] book is witty, well-written, scientifically lucid, and packed with case histories, amusing anecdotes, and practical information. Anyone with a genuine interest in the subject—whether professional or general—can hardly fail to be impressed and enlightened.”—John A. Lee, Biologist

“Dr. Goff’s incisive, detailed and often humorous description of forensic entomology will be a popular addition to any library… Dr. Goff describes in great detail the use of insects in criminal investigations, liberally illustrating his information with detailed case histories. He clearly illustrates how insects are used in death investigations, to determine time of death, as well as aiding in many other facets of the investigations.”—Gail Anderson, Entomological Society of Canada

“Lee Goff leads us through his exciting and, at the same time, entertaining world that strongly depends on silent crime scene assistants: maggots, adult flies, beetles and, occasionally, a grasshopper.”—Mark Benecke, Quarterly Review of Biology

“Anyone interested in forensics will want to read [A Fly for the Prosecution]. Author M. Lee Goff has pioneered the use of entomology to assist in solving crimes. [His] book is easy to read and free of technical jargon… This is a great book for everyone to read. I recommend it especially to the professional entomologist and to anyone who uses insects in the classroom or who has an interest in forensics.”—Susan Y. Nichols, Science Books & Films

“[Goff] is both well-versed on the topic and adept at presenting his findings… In sometimes gory but always riveting detail, Goff tells how maggots, flies, and beetles feasting on dead bodies can help forensic entomologists.”—Science News

“Goff, a pioneer in the field [of forensic entomology], says he learned to avoid jargon when testifying in court, and in his maximally informative, minimally rebarbative professional memoir, he treats readers as if they were jurors. His tales of analyzing the species found on a corpse…should prove riveting to anyone interested in insects or crimimal procedure.”—Ray Olson, Booklist

“Despite the disturbing subject of this book, Goff…does an excellent job of clearly presenting the historical development and the scientific basis for the practice of forensic entomology.”—Choice

“[A] lively and informative firsthand account of forensic entomology in the United States. A consultant to the Medical Examiner of Honolulu, [Goff] is especially well qualified to write this book because of his involvement in many criminal investigations and his leadership in a profession that has come into its own within the past two decades… This book is not for the squeamish, owing to the descriptions of corpses at the scene of death, in the morgue, and in varies states of decay, [but] Goff also writes about coping with murder scenes, testifying in court, and publicizing his profession. This book should appeal to a wide audience, owing to its readability and novel subject matter.”—William H. Wiese, Library Journal

“There are actually people who use their vast knowledge of creepy crawlers to help police and other law enforcement agencies solve crimes! A fascinating book written by M. Lee Goff will give you plenty of information—maybe more than you want to know.”—Publishers Weekly