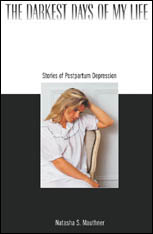 The Darkest Days of My Life

Having a baby is surely one of the pinnacle events of a woman’s life, full of joy, serenity, and contentment--or so society tells a new mother, who thus finds herself ill-prepared for the exhaustion, boredom, and isolation that can follow childbirth. The resulting depression--how it is experienced, and how it might be relieved--is the subject of Natasha Mauthner’s insightful and compassionate book, which recounts the stories of new mothers caught between a cultural ideal and a far more complex reality.

In Mauthner’s interviews with thirty-five new mothers in Britain and America, we see how women contend with images of motherhood as a state of bliss for everyone but themselves. The British women tend to view their depression as a personal failure of strength; American women, as a result of hormonal fluctuation. But all vividly describe a similar state of paralysis and loneliness, with alternating love, resentment, and guilt toward their babies.

Most usefully, these women reveal the positive impact that other new mothers had on their depression. Far more important than their own family’s support or understanding, the sense of not being alone in their trials emerges as a key source of strength and healing for women struggling with postpartum depression.