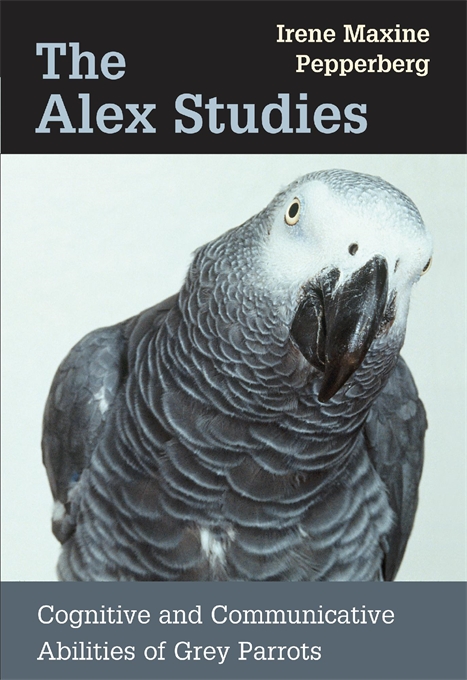 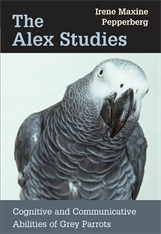 “Alex’s spectacular abilities were sensationalized in the news media, as though it were a talking parrot act. That obscured the significance of the studies, which is why The Alex Studies is important… [Irene Pepperberg has] done groundbreaking experiments, and bringing them together in a panoramic view is a great service… She describes simply what she did, and why and how her results compare with equivalent language-use and comprehension studies on chimps, marine mammals and children… She proves that animals have abilities greater than we are led to expect, but these can be revealed only by appropriate research tools. She succeeds where many others failed, and she convinces us that the details of investigative methods are what matter. The purpose is not to reveal Alex as a winged Einstein. Instead, she shows that complex mental operations are revealed only be precise methods that match the capabilities investigated. And she demonstrates remarkable parallels between parrots and humans. The core importance of social interaction in both learning and testing is crucial for her results. In that, her studies have relevance far beyond parrots.”—Bernd Heinrich, The New York Times Book Review

“Pepperberg’s work is admirably rigorous. Earlier work with language-trained animals was notorious for poor design and overly charitable interpretations of data. Pepperberg, by contrast, takes careful precautions against inadvertent cueing. She uses conservative estimates of chance when assessing the statistical reliability of Alex’s responses, and she shows restraint when interpreting her results… Pepperberg has organized her book in a quasi-historical fashion, framing each phase of her research in terms of the contemporary work that inspired or informed it. Each chapter is devoted to a particular capacity or competence, such as numerical cognition, categorization, or the comprehension of words… From those who wish to read selectively (or for instructors who wish to assign only one or two chapters) it should be quite welcome because each chapter can stand on its own reasonably well… The book should be accessible to a wide range of audiences, from researchers studying animal behavior to advanced undergraduates in a course that covers relevant material such as animal cognition or the capacities of language-trained animals.”—Edward Kako, Science

“Alex’s abilities are extraordinary, and Pepperberg’s investigation of them makes The Alex Studies essential for anyone interested in the wider issues it raises… As with other pioneering works from Darwin’s to E. O. Wilson’s, its influence will be felt throughout the field of animal ethology for years to come.”—Caroline Fraser, The Los Angeles Times

“What distinguishes the work of Pepperberg from that of the majority of researchers working with language-trained apes is that she is truly interested in the underlying cognitive processes involved in her subject’s behaviour. She thus asks questions…and then designs experiments to test the possibilities…this book represents a scholarly reporting of a scientist’s quest to understand the mind of another species in as honest and rigorous a manner as is possible, under the circumstances of being both ‘parent’ and investigator.”—Michael Tomasello and Josep Call, Animal Behaviour

“Irene Pepperberg’s studies of Alex are some of the most remarkable and significant in the whole field of animal cognition. Her evidence stands up to the closest scrutiny, and Alex the parrot turns out to have cognitive abilities that were not even suspected before Pepperberg began her work.”—Marian Dawkins, University of Oxford

“Pepperberg has elegantly summarized her 20 years of success showing that an African Grey Parrot can match the cognitive and communicative competence of great apes. Her training paradigm involving reference, functionality and social interaction permits the expression of abilities hitherto unexpected in birds and challenges traditional views of the evolution of intelligence.”—Charles T. Snowdon, University of Wisconsin–Madison

“For researchers in the field of animal cognition, Pepperberg brings together in a well organized form 20 years of her work with Grey parrots. In detailing the training and remarkable achievements of Alex and the other birds in Pepperberg’s lab, The Alex Studies makes it clear that parrots are capable of much more than “parroting” or mechanically mimicking what they hear. But this book makes a much greater contribution. It provides a general integrative framework for the larger field of animal cognition, providing much needed links between important natural behavior selected for by evolutionary processes and theories and data from human cognitive development.”—Thomas R. Zentall, University of Kentucky