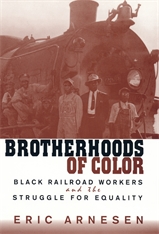 Black Railroad Workers and the Struggle for Equality

“Arnesen tells a story that should be of interest to a variety of readers, including those who are avid students of this country’s railroads. He knows his stuff, and furthermore, reminds us of how dependent American railroads were on the backbreaking labor of racial and ethnic groups whose civil and political status were precarious at best: Irish, Chinese, Mexicans and Italians, as well as African-Americans. But Arnesen’s most powerful and provocative argument is that the nature of discrimination not only led black railroad workers to pursue the path of independent unionism, it also propelled them into the larger struggle for civil rights.”—Steven Hahn, The Chicago Tribune

“Arnesen provides a fascinating look at U.S. labor and commerce in the arena of the railroads, so much a part of romantic notions about the growth of the nation. The focus of the book is the troubled history of the railroads in the exploitation of black workers from slavery until the civil rights movement, with an insightful analysis of the broader racial integration brought about by labor activism.”—Vanessa Bush, Booklist

“In this superbly written monograph, Arnesen…shows how African American railroad workers combined civil rights and labor union activism in their struggles for racial equality in the workplace… Throughout, black locomotive firemen, porters, yardmen, and other railroaders speak eloquently about the work they performed and their confrontations with racist treatment… This history of the ‘aristocrats’ of the African American working class is highly recommended.”—Charles L. Lumpkins, Library Journal

“[An] exhaustive and illuminating work of scholarship.”—Publishers Weekly