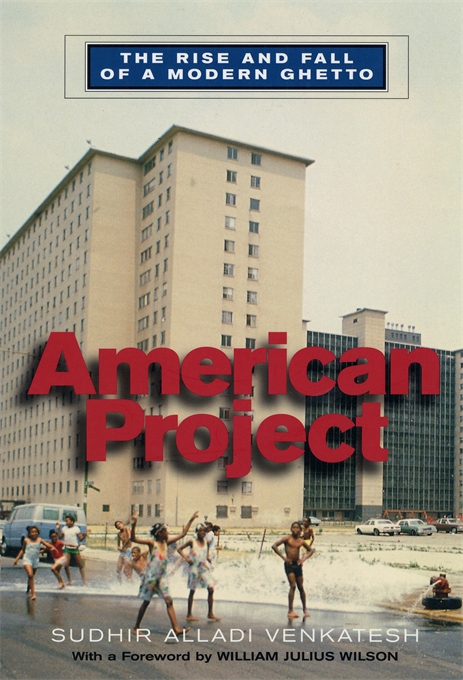 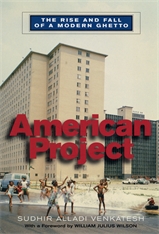 The Rise and Fall of a Modern Ghetto

“[This] history of Chicago’s notorious Robert Taylor Homes…[describes] how this once promising program fell so low and [offers] cautionary lessons for progressives who want to devise successful social policies… Venkatesh probes beyond the headlines about Robert Taylor Homes—the shootings, murders, accidental deaths, and police sweeps—and shows us how its residents used whatever resources were at hand to adjust to adverse circumstances. The brilliance of the author’s approach is that he listens sympathetically to the people who lived and worked in this massive public housing development, yet he remains scrupulously objective.”—Alexander von Hoffman, The American Prospect

“American Project examines the Robert Taylor Homes, a high-rise public housing complex in Chicago. It records the initial hopes when the development opened in 1962 and the deterioration that later occurred… [This book] is a rich and perceptive account of the inhabitants of the project, which brings us into close contact with everyone from poor tenants to drug peddling gangs… In this vivid and compelling portrait of the project, Venkatesh describes the breakdown of the public housing effort in 20th-century America. Most important is his observation that service providers and other officials often operated in a system that limited their ability to improve conditions.”—Allan Winkler, The Times Higher Education Supplement

“The demolition of high-rise public housing such as the Robert Taylor Homes can only improve the lives of those presently subjected to its debilitating and dangerous grasp, right? Wrong. That, at least, is the carefully thought-out view of Sudhir Alladi Venkatesh in American Project: The Rise and Fall of a Modern Ghetto. Revivifying participant observation as a form of sociological research, Venkatesh…has produced an ethnography of the South Side’s most infamous project that challenges much of what passes for conventional wisdom… In many ways, Venkatesh’s study…appears as a brief against a policy of demolition and dispersal… Forced relocations with minimal assistance would uproot the social networks painstakingly created over the past generation and represent a retrogression… The problem, in short, lay not simply with the occupants of public housing but in their relationship with the larger society.”—Arnold Hirsch, The Chicago Tribune

“Venkatesh wrote American Project to urge readers to get beyond the quantitative, statistical measure of the urban pathology of public housing and look at the ‘collective memory’ of the people who lived there. It’s all too easy to disparage life in the projects, Venkatesh notes, but such thinking also disparages the forms of community, political organization, and ultimately the lives of those who made Robert Taylor their home… American Project is moving, thoughtful, and written with common-sense clarity.”—Michael Corbin, The Baltimore City Paper

“American Project is a revealing look at what works (and what doesn’t) in public housing—and why. Sudhir Alladi Venkatesh, one of the most promising young sociologists today, tells the story of one of America’s most infamous housing projects, the Robert Taylor Homes in Chicago… Based on nearly a decade of fieldwork within the projects themselves, American Project is the first comprehensive story of what went wrong in one of America’s first and most famous public housing projects. By engaging himself with the community, Venkatesh gets beyond a purely academic analysis and is able to illustrate the benefits and pitfalls of urban public housing both in the Robert Taylor homes and within the larger realm of urban studies. He draws on his personal relationships with tenants, and local police officers and municipal organizations—to tell the real story of the besieged inner-city community that journalists and outsiders often never see.”—Black Perspective

“The general public believes the Robert Taylor Homes are an unmistakable failure. But author Sudhir Alladi Venkatesh challenges that view… It’s not that most communities are free of the social ills that infect public housing but ‘that we ask more of the poor, and particularly those in public housing’… [whose] good intentions [are] thwarted by poor law enforcement, diminished federal funding, thriving underground economies and increased gang violence.”—Chicago Reporter

“This book gets beyond academic analysis and gives voice to residents’ concerns over education and health care, as well as the lack of employment opportunities, which in turn pushes young people to the streets in search of a means of earning money. By describing inhabitants’ strident efforts to unify the community and fight political battles against an often indifferent bureaucracy, Venkatesh challenges the stereotypical notion that public housing fails because its residents do.”—Doubletake

“The results of Venkatesh’s myriad experiences are encomapped in 332 rivetting, thought-provoking pages… Completely different from the usual sociological tracts, American Project proffers a strong narrative and vivid stories. It offers its readers challenging insights into the lives of people in the government-subsidised [Robert Taylor] Homes. Above all, it stunningly portrays the transformation of a curious Indian-American ‘outsider’ into an ‘insider’ who gradually comes to understand and appreciate ‘the beauty of human condition’ amidst squalor and violence.”—Arthur J. Pals, India Today International

“The major contribution of this book is its focus. Most of the recent books on the life of the inner city ghetto focus exclusively on the individual behavior of poor urban residents, and stress the pathology of the inner city. American Project, however, documents continuous efforts of the project residents to create community, to pool resources and political muscle to insure the continuation of basic services, and to secure democratic representation. The ultimate failure of Robert Taylor Homes was not a lack of trying, but rather that the problems faced by the residents went beyond what they could address with limited resources.”—G. Rabrenovic, Choice

“Venkatesh spent hundreds of hours interviewing residents of Chicago’s Robert Taylor Holmes housing project. Poorly designed, cheaply built, and isolated from surrounding neighborhoods by an expressway, the Holmes project was doomed almost from the start… Venkatesh describes the struggles of tenant leaders and social activists who resisted the gangs and sought to improve living conditions, but he can’t point to any wholesale reform in what was a fatally flawed system from the get-go.”—Kirkus Reviews

“A fascinating and rigorous explanation of a how a model of urban subsidized housing, which succeeded for 20 years, declined into disastrous conditions for its inhabitants… [American Project] is an important contribution to understanding urban poverty and will stand with classic work by Carol Stack and William Julius Wilson (who wrote the foreword). Highly recommended.”—Paula R. Dempsey, Library Journal