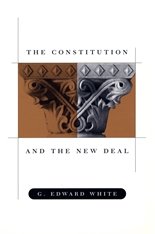 The Constitution and the New Deal

“Well-crafted point-of-view books, especially those that challenge conventional understandings, are often a pleasure to read. By focusing on facts, interpretations, and logical arguments inconsistent with the prevailing wisdom, such books chip away at long entrenched views and create room for doubt that did not previously exist…they frequently initiate serious reconsideration of settled things. Such a book is G. Edward White’s latest effort, The Constitution and the New Deal. In this volume the distinguished University of Virginia legal historian offers a frontal attack on conventional understandings of the New Deal and its effect on American jurisprudence… White’s volume is well-argued and well-documented. It provides a coherent and often compelling argument, one that reflects considerable scholarly thought over a significant period of time… White’s argument encourages a creative rethinking of an historical account previously considered settled.”—Thomas G. Walker, Law and Politics Book Review

“White’s expressed intent is to complicate conventional historical narratives on American jurisprudence and constitutional law by noting the starting premises, if not biases, of those earlier narratives. He explores the role of the legal elite—who believed that ordinary rules did not apply to them—in interpreting the constitution during the New Deal era… This is a worthy book not only for readers interested in constitutional history but for those interested in the cultural complexities of the U.S.”—Vernon Ford, Booklist

“White is powerfully persuasive as he traverses the constitutional landscape of the past century. This major contribution to the literature of constitutional jurisprudence deserves a broad readership.”—R. J. Steamer, Choice

“At last American constitutional history has emerged from the long shadow of the Court-packing plan. With enormous subtlety and unfaltering intelligence, White shows us that the twentieth-century transformation of federalism and individual rights was part of a larger and more fundamental shift in thinking about law and justice in America.”—Daniel Ernst, Georgetown University Law Center

“For almost sixty years, constitutional scholars pictured the New Deal as High Noon, in which pioneers of a radically expanded role for national government faced reactionary defenders of laissez-faire and ‘substantive due process’ on the Supreme Court in a dramatic showdown—and won. In this important and provocative book White supports a band of revisionists who have exposed this story as a myth—too simple, too dramatic, too sudden, too inattentive to the subtleties of changes in constitutional law—and significantly adds to their work with original chapters on the evolving law of foreign relations. He also shows how and why scholars of the post-New Deal era came to construct the myth of High Noon, and to canonize Holmes and Brandeis as its heroes. This book, backed by White’s great authority as a historian of constitutional thought, will either change a lot of minds or start a lot of arguments. It will probably do both.”—Robert W. Gordon, Yale Law School

“A genuinely interesting book, likely to be reviewed and discussed, especially as it is one of the first of the major synthetic efforts bringing together the new understandings.”—Sanford Levinson, author of Written in Stone

“White executes a brilliant strategy for demonstrating the persuasiveness of his new paradigm. He offers a new understanding of early-twentieth-century legal development that explains change across a wide spectrum of topics in a consistent fashion. White’s explanation, which has substantial power, constitutes a major intellectual accomplishment.”—William E. Nelson, author of The Fourteenth Amendment