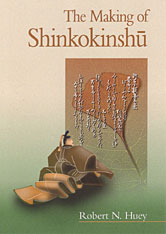 This study of the Japanese imperial court in the early thirteenth century focuses on the compilation of one of Japan’s most important poetry collections, Shinkokinshū. Using personal diaries, court records, poetry texts, and literary treatises, Robert N. Huey reconstructs the process by which Retired Emperor Go-Toba brought together contending factions to produce this collection and laid the groundwork for his later attempt at imperial restoration. The work analyzes how poetic discourse of the imperial court animated both other kinds of writing and other activities. Finally, it underscores the inextricable ties between the writing of poetry and court politics.

Shinkokinshū—the “New Kokinshu”—has been viewed as a neo-classical effort. Reading history backward, scholars have often taken the work to be the outgrowth of a nostalgia for greatness presumed to have been lost in the wars of the origins of the collection. The author argues that the compilers of Shinkokinshū instead saw it as a “new” beginning, a revitalization and affirmation of courtly traditions, and not a reaction to loss. It is a dynamic collection, full of innovative, challenging poetry—not an elegy for a lost age.