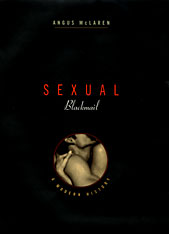 Sexual blackmail first reached public notice in the late eighteenth century when laws against sodomy were exploited by the unscrupulous to extort money from those they could entrap. Angus McLaren chronicles this parasitic crime, tracing its expansion in England and the United States through the Victorian era and into the first half of the twentieth century. The labeling of certain sexual acts as disreputable, if not actually criminal--abortion, infidelity, prostitution, and homosexuality--armed would-be blackmailers and led to a crescendo of court cases and public scandals in the 1920s and 1930s. As the importance of sexual respectability was inflated, so too was the spectacle of its loss.

Charting the rise and fall of sexual taboos and the shifting tides of shame, McLaren enables us to survey evolving sexual practices and discussions. He has mined the archives to tell his story through a host of fascinating characters and cases, from male bounders to designing women, from badger games to gold diggers, from victimless crimes to homosexual outing. He shows how these stories shocked, educated, entertained, and destroyed the lives of their victims. He also demonstrates how muckraking journalists, con men, and vengeful women determined the boundaries of sexual respectability and damned those considered deviant. Ultimately, the sexual revolution of the 1960s blurred the long-rigid lines of respectability, leading to a rapid decline of blackmail fears. This fascinating view of the impact of regulating sexuality from the late Victorian Age to our own time demonstrates the centrality of blackmail to sexual practices, deviance, and the law.