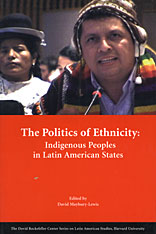 The Politics of Ethnicity

The indigenous people of the hemisphere have resisted a five-hundred-year assault, fighting to maintain their cultural identities. During this time, authorities in the Americas have insisted that the toleration of indigenous societies and cultures would undermine their respective states. In recent years, however, the nations of the Americas have started to reverse themselves. They are altering their constitutions and proclaiming themselves multiethnic. Why is this happening now? The Politics of Ethnicity: Indigenous Peoples in Latin American States, edited by David Maybury-Lewis, helps us understand the reasons and history behind these times of transition.

The book provides a valuable overview of current problems facing indigenous peoples in their relation with national states in Latin America, from the highlands of Mexico to the jungles of Brazil. The traditional, sometimes centuries old, relations between states and indigenous peoples are now changing and being rediscussed. The collection, authored by U.S. and Latin American anthropologists using interdisciplinary approaches, enables the reader to understand these recent developments in a comparative framework. An ambitious and quite thorough collection, it is brought together skillfully by one of the discipline’s maître penseurs.