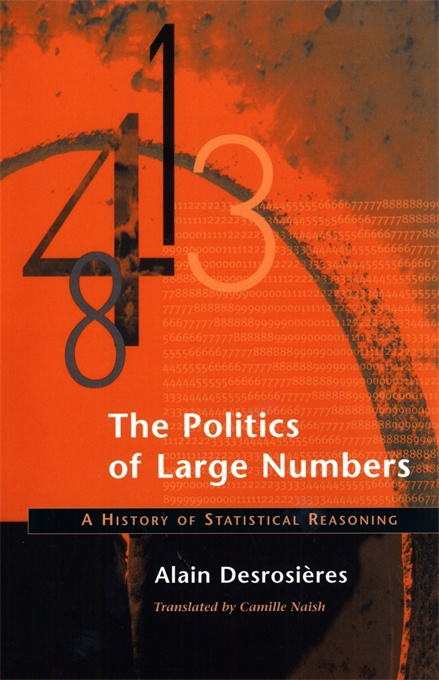 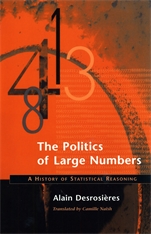 The Politics of Large Numbers

A History of Statistical Reasoning

“Statistics works in and on the world, simultaneously describing and remaking. It straddles the chasm between the invented and the discovered, the real and the constructed—oppositions that have structured an increasingly sterile debate about the nature of science among historians, philosophers, sociologists, and scientists. The great merit of Desrosières’ study is that it points the way beyond this impasse by showing how statistical entities are simultaneously real and constructed, invented and discovered.”—Lorraine Daston, London Review of Books

“This is a good book… The strength of Alain Desrosières’s account lies in the rich and insightful way he has analysed his subject—statistical reasoning… Anyone interested in the history of science and economics and, particularly, applied mathematics, will be stimulated by this book.”—Hugh Pennington, The Times Higher Education Supplement

“Statistics, with its aura of dispassionate dustiness, does not have a good image. It is detested by generations of social-science students, a grim necessity for medical researchers, distrusted by the general public. Many of these—and some statisticians—would be surprised to discover how often statistics has responded to social developments or even influenced them. The broad theme of [The Politics of Large Numbers] is that statistical measures and probabilistic concepts are most usefully seen as matters of convention, rather than of objective reality. The social context generates the need to make things countable and to interpret the counts; it also conditions the conventions that emerge.”—Jonathan Rosenhead, Nature

“This is a work of tremendous erudition that is far broader in scope and significance than its title suggests. Coming at the end of an explosive 15-year period of research, here and in Europe, on the history of statistical thinking, Desrosières’s book is at once a powerful synthesis of recent scholarship and a path-setting effort to extend this research into important areas that have gone relatively unattended… His case for the applicability of the actor-network approach to the historical development of statistical thought is a compelling one, which is very effective at sociologically integrating many of the different currents that formed this broad development.”—Charles Camic, American Journal of Sociology

“Desrosières’s discussion of the various translations statistics has been able to achieve is both scholarly and erudite. It is also now one of a number of recent histories of statistics published over the last fifteen years that offers a critical approach to statistics. Rather than accepting that statistics is necessarily correct because it is based on the seemingly universal logic of mathematics, The Politics of Large Numbers, and other works in the same genre, are keen to show that statistics is a contingent and local enterprise, one shot through with the peculiarities of the particular social, cultural, and political context in which it is practised… Desrosières’s book is a fine piece of work.”—Trevor J. Barnes, Environment and Planning

“Alain Desrosières’s ambitious and critical study seeks to reconstruct the modern historical contexts in which the use of statistics and statistical methods evolved rapidly… There is no other book quite like The Politics of Large Numbers. Its uniqueness lies in its impressive historical and intellectual sweep. In addition to tracing the changing connections between state construction, scientific development, and statistical reasoning in modern times, it highlights their recent intersections in ways that may be of particular interest to readers.”—Joseph P. Smaldone, Perspectives on Political Science

“ [The Politics of Large Numbers] shows, with many historical details, that biometrics did not become a subject for mathematical statistics alone, but for administrative statistics as well.”—Jochen Fleischhacker, Population Studies

“This is an ambitious, complex and sophisticated ‘sociology of numbers,’ a study of the history of statistics and an analysis of its function within the state. It covers the relevant technical mathematical subjects as well as the epistemological questions raised by the reification of numbers with impressive erudition and subtlety… Desrosières’s work is an impressive synthesis of technical, historical, and philosophical thinking on statistics and the state in the modern Western world, available nowhere else. The book seems destined to be a standard reference in the areas of statistics, government, history, and economics as well as other disciplines like psychology where ‘reasoning through numbers’ plays an essential role. The style is sophisticated and, while demanding, is generally engaging.”—Carol Blum, State University of New York at Stony Brook

“The book is a critical, scholarly and accurate synthesis of an extremely broad spectrum of the history of statistics, with an emphasis on the conceptual development of social statistics, culminating in twentieth century applied econometrics. Desrosières’s treatment is not highly technical, although he does exhibit an easy competence with the technical side. A significant strength of the work is the discussions of the relationships of the development of statistics to national and international statistical agencies, and the relationship of economic ideas to the statistical constructs employed to measure them. No other work exhibits the same breadth—probability, mathematical statistics, psychology, economics, sociology, surveys, public health, medical statistics.”—Stephen M. Stigler, University of Chicago