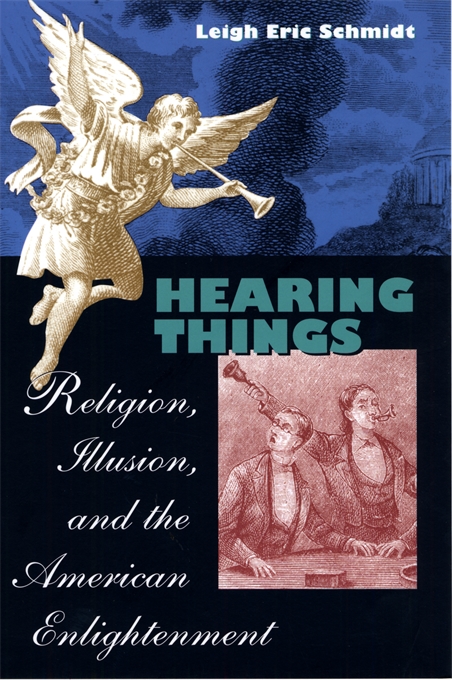 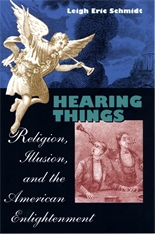 Religion, Illusion, and the American Enlightenment

“In this intriguing, heavily researched study, Schmidt considers the interaction between American Christianity and the Enlightenment with regard to hearing in an era when ventriloquism became a popular entertainment and Thomas Edison invented his phonograph. The very tools that had been developed to debunk spiritism were now being used to advance it. The author studies hearing as a cultural phenomenon, both scientific and religious, in this fine interdisciplinary study that sheds much light on a particular period of American history.”—Augustine J. Curley, Library Journal

“Who silenced the angels? For an answer, Schmidt turns back to the 18th and 19th centuries to look at Enlightenment philosophers and traveling ventriloquists, at acoustic engineers, anatomists and alienists, each of whom demonstrated in his own way the structures that undergirded claims of the miraculous… This densely argued, fascinating story features a panorama of colorful characters, from the Swedish mystic Emanuel Swedenborg to the traveling showman William Frederick Pinchbeck and his Pig of Knowledge. Schmidt’s study offers an important chapter in the genealogy of the modern religious imagination.”—Publishers Weekly

“This engaging book is remarkable for the breadth and depth of its research, its freshness and analytical power, and its fluid and witty style. Leigh Schmidt makes a persuasive and essential argument for the recovery of religion as a matter of senses, while exploring the ironies of ‘secularization’ in the eighteenth and nineteenth centuries.”—David Hall, Divinity School, Harvard University

“Hearing Things is a profound meditation on the surprisingly enduring dialectic among pre-modern, Enlightenment, and post-modern attitudes toward human experience, merged with a thoughtful account of supernatural and charismatic forms of Christianity. This is an important and an unusually insightful book.”—Mark Noll, Wheaton College

“Insightful, witty, succinct—would that more academic books possessed the qualities which Hearing Things displays in abundance. This is a major contribution to the analysis of a key historical problem.”—Roy Porter, Wellcome Institute for the History of Medicine