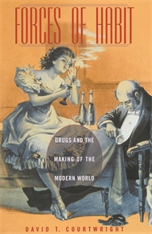 Drugs and the Making of the Modern World

“Courtwright tackles every one of the so-called psychoactive drugs. Some might find his scope surprising. Drugs are divided roughly into two kinds, ‘hard’ and ‘soft.’ Heroin and cocaine are hard, cannabis and ecstasy soft. Most people recognize that alcohol and tobacco are also drugs, but don’t think about them much. Still less do they consider the everyday drugs they indulge in. Courtwright does and includes them: tea, chocolate, coffee and coca. All over the world, people discovered natural substances that affected consciousness. Then came international trade in some drugs. It had immense social effects, good and bad. Courtwright writes engagingly and with humor, not discouraged by the daunting field he has to cover.”—Roy Herbert, New Scientist

“This book offers a fascinating, entertaining, and perceptive account of how politics, profit, and pleasure have shaped contemporary attitudes about psychoactive substances… In Forces of Habit [Courtwright] reviews, with calm reason and humor, histories of the use and abuse of a complete spectrum of psychoactive substances including alcohol, tobacco, caffeine, opiates, cannabis, cocaine, and hallucinogens… Courtwright presents a fresh and discerning discussion of contemporary issues and problems surrounding both illicit and legalized drugs.”—Jack H. Mendelson, Science

“A global history of the acquisition of progressively more potent means of altering ordinary waking consciousness, this book is the first to provide the big picture of the discovery, interchange, and exploitation of the planet’s psychoactive resources, from tea and kola to opiates and amphetamines.”—African Sun Times

“While we are very used to thinking of illegal drugs as destructive, historian David Courtwright vividly demonstrates…that most of these psychoactive substances have exacted and still exact a heavy toll… Courtwright, a historian who has written earlier admired books examining illegal drugs and the nature of violence in America, describes the rise of the global drug trade, discusses why some drugs are more popular than others, and then considers the intersection of drugs and political and economic power… What then caused the commercial and political leaders of the western world, who were profiting so wonderfully from the psychoactive revolution to reconsider their avid promotion of these products? In a phrase: the industrial revolution. As Courtwright so succinctly puts it, ‘A drunken field hand was one thing, a drunken railroad brakeman quite another.’”—Jill Jonnes, Baltimore Sun

“Why is tobacco legal and marijuana illegal? What is the difference between nations using alcohol to lure natives into questionable transactions, and drug dealers selling their products in dark corners (or broad daylight)? David Courtwright’s illuminating history of drugs in the modern world will shock and surprise readers who still believe that only criminals use—and want—drugs.”—Lee Milazzo, Dallas Morning News

“[Courtwright’s] clearly written, thoughtful book…is unique in its broad scope… There is a lot to keep straight in this readable account. Though not a comprehensive history of drugs, it is good at identifying the trends and patterns from about the sixteenth century that have brought about Courtwright’s ‘psychoactive revolution.’ This is the book to go to when planning an assault on Jeopardy!”—Barbara Liss, Houston Chronicle

“[This book] couldn’t be more timely arriving amid challenges to national drug policy… [It] is refreshingly evenhanded, potentially enlightening both to legalization proponents and those who consider tough anti-drug laws a moral imperative. Compact, quick-paced and witty… Forces of Habit is a thorough chronicle of a vast, complicated problem. Readers who think they know the solution to the drug dilemma are likely to come away with a better understanding of what a mess it really is.”—Katy Read, Minneapolis Star-Tribune

“[With] entertaining details…[Courtwright’s] lively writing spices up a serious take on a grave subject. While Courtwright sees licit substances like tea and illegal heavy-hitters like cocaine as two ends of the same spectrum, he’s by no means trying to minimize the dangers of drugs. Rather, he wants to lay out the history clearly—perhaps partly hoping that if policy setters understand how drug use spread so widely and deeply, they’ll be better equipped to fight it.”—Polly Shulman, Newsday

“Alcohol joins caffeine and tobacco to round out what Courtwright calls the ‘big three’ of currently legal psychoactive drugs. As he sees it, modern civilization is practically unthinkable without this trio. But why have they fared so well while equally intoxicating substances—like, say, marijuana—are banned and stigmatized, and others—like kava, khat and betel—are popular only in distinct geographic areas? And why is tobacco currently falling in popularity, while alcohol and caffeine are holding their grip on us? These questions are only partly answered in Courtwright’s otherwise excellent book, but that’s not really his fault. Drugs are as deceptive and multifaceted as the human beings whose metabolisms they mess with; a history of drugs may be possible, but an analysis of their role in culture is bound to be incomplete and provisional. There are simply too many ways to tell the story… Courtwright’s historical investigation is solid and fascinating.”—Maria Russo, Salon

“Forces of Habit offers an ambitious interpretation of a challenging topic: the evolution of drug use and drug policy through time and across continents. Happily, it does this with no axe to grind. Most books in this genre that transcend the purely descriptive adopt a sensationalistic muckraking tone untroubled by coherence, let alone analysis… In refreshing contrast, David Courtwright has produced a serious book about a serious topic, and it is a fun read to boot. His explanation of how we got to where we are with drugs succeeds in large measure by focusing on the commonalities across different substances. The central insight of this book is that when viewed from a broad perspective, most psychoactive substances have similar histories.”—Jonathan P. Caulkins, Issues in Science and Technology

“A penetrating study of what the author deems one of the most significant events in world history: the ‘psychoactive revolution’… Courtwright traces the origins of [psychoactive] substances, showing how political and economic forces have combined to ‘transform the everyday consciousness of billions of people and, eventually, the environment itself.’ His tale is endlessly fascinating, with oddments enough to enliven a thousand dissertations and cocktail parties… He has succeeded admirably in a book likely to become a standard.”—Kirkus Reviews

“In this engaging study, [Courtwright] shows how body- and mind-altering plants and their byproducts, as well as synthetic compounds, have also radically changed agriculture, commerce, religion, law and government as ‘drug cultivation and manufacturing’ have become big business. His argument is founded on an intriguing and encyclopedic array of information… In his discussions of the attempts and failures to do away with these substances…Courtwright’s exhaustive details cohere in a complex portrait of how psychoactive substances are not only part of human experience but, in many ways, fundamental to our view of civilization.”—Publishers Weekly

“Whether talking about America or China, caffeine or nicotine, Antiquity or Modernity, Courtwright has a sureness of touch and a completeness of information which are consistently impressive. His book is geographically and chronologically comprehensive. Forces of Habit is beautifully written in a controlled, easy, fluent style. This book should be of interest to a wide range of scholarly and lay readers in the fields of history, medicine, health-policy, politics, legal studies, international relations. There is no other book like it.”—Roy Porter, author of Creation of the Modern World

“Courtwright underlines the contingent and historical aspect of the circumstances that have allowed some psychoactive substances to be defined as licit and the others as illicit. The book covers an enormous range of material, time, and place. Courtwright has a good eye for the telling incident or policy reflection. Coherent and comprehensive.”—Charles E. Rosenberg, University of Pennsylvania