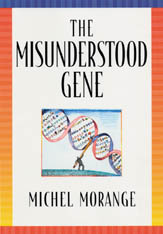 “Morange develops various important implications of the broader view of gene action, which he illustrates with concrete examples, mostly from human and mouse genetics…the book is well written and accurate.”—Brian Charlesworth, Nature

“[Morange] lays out a clear view of the gene as the way to understand how cellular processes are controlled and regulated… [He] gives examples of the ways in which genes are related to physiological processes. His examples emphasize the diversity and complexity of these relationships.”—William C. Summers, American Scientist

“[Morange] skillfully weaves a picture of the incredibly complex molecular dance of life itself, in which genes are but a fairly small player. This book should be required reading for anyone associated with genomic research or gene therapy, in addition to the general public. In solemnly assaying the limits of our [scientific] knowledge, [it] also successfully describes the incredible beauty and complexity of biological life.”—Fintan R. Steele, Medscape General Medicine

“In this tour of recent findings in molecular biology, Morange shows us how genes contribute to biological processes and complex human behavior—when they do. He makes it clear that we do not have to choose between rigid genetic determinism and fearful rejection of any specific role for genes in development or behavior. The Misunderstood Gene demystifies the power of modern genetics and refocuses biology on the many complex interactions that start with our genes but do not necessarily end there. The sequencing of the human genome, now complete, is just the beginning of the story. An engaging and enlightening book for readers concerned about the promise and peril of genetic research.”—TechDirections

“Morange…challenges readers to reevaluate their textbook understanding of the role of the gene in living systems. Morange takes readers beyond the gene’s seemingly mundane existence as an instructional manual for ordering amino acids within a protein. Using the latest discoveries from the labs of the modern molecular biologist, the operational focus of the gene is highlighted as its phenotypic expression at the level of the organism. From gene knockout experiments to the genetic basis of disease, Morange reminds the reader that traits such as intelligence, behavior, aging, and even the death of an organism do not fit well within the one-gene-one-protein model. The reader will explore well-supported arguments that show how genes are defined by the function of their protein products within complex (and often misunderstood) networks of interacting molecules.”—J.A. Hewlett, Choice