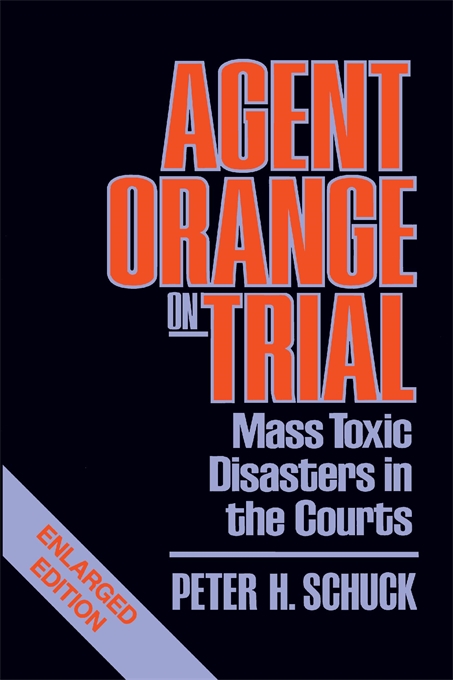 Agent Orange on Trial is a riveting legal drama with all the suspense of a courtroom thriller. One of the Vietnam War’s farthest reaching legacies was the Agent Orange case. In this unprecedented personal injury class action, veterans charge that a valuable herbicide, indiscriminately sprayed on the luxuriant Vietnam jungle a generation ago, has now caused cancers, birth defects, and other devastating health problems. Peter Schuck brilliantly recounts the gigantic confrontation between two million ex-soldiers, the chemical industry, and the federal government. From the first stirrings of the lawyers in 1978 to the court plan in 1985 for distributing a record $200 million settlement, the case, which is now on appeal, has extended the frontiers of our legal system in all directions.

In a book that is as much about innovative ways to look at the law as it is about the social problems arising from modern science, Schuck restages a sprawling, complex drama. The players include dedicated but quarrelsome veterans, a crusading litigator, class action organizers, flamboyant trial lawyers, astute court negotiators, and two federal judges with strikingly different judicial styles. High idealism, self-promotion, Byzantine legal strategies, and judicial creativity combine in a fascinating portrait of a human struggle for justice through law.

The Agent Orange case is the most perplexing and revealing example until now of a new legal genre: the mass toxic tort. Such cases, because of their scale, cost, geographical and temporal dispersion, and causal uncertainty, present extraordinarily difficult challenges to our legal system. They demand new approaches to procedure, evidence, and the definition of substantive legal rights and obligations, as well as new roles for judges, juries, and regulatory agencies. Schuck argues that our legal system must be redesigned if it is to deal effectively with the increasing number of chemical disasters such as the Bhopal accident, ionizing radiation, asbestos, DES, and seepage of toxic wastes. He imaginatively reveals the clash between our desire for simple justice and the technical demands of a complex legal system.