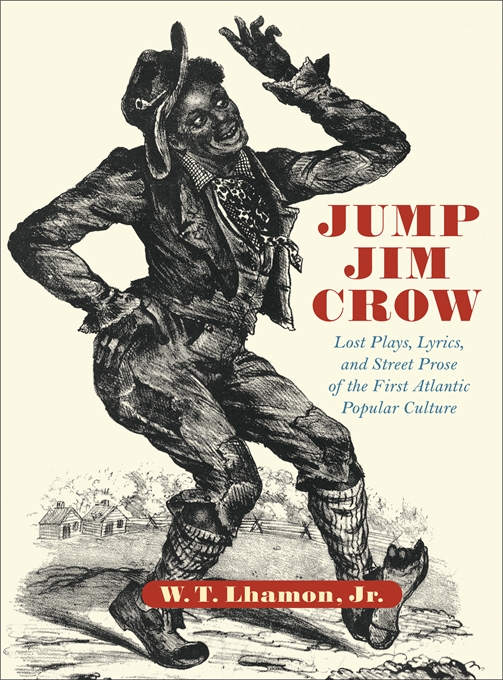 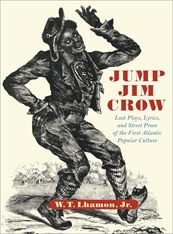 “Lhamon provides a superb follow-up to his outstanding Raising Cain: Blackface Performance from Jim Crow to Hip Hop. This study focuses on the character of Jim Crow (a ‘cultural collage’) as evolved largely by actor Thomas D. Rice (1806–1860), before the meaning of the name became chiseled in stone… At the heart of the book are expertly and thoroughly edited texts of thirteen songs, nine plays (including the never-published Otello), and two street prose versions of Jim Crow’s life. These, along with illustrations and a perceptive, many-layered, and lengthy analytical introduction, make for the most complete offering of primary sources and criticism available to lead readers toward an understanding of these complex texts, their coding, and the controversial figure of Jim Crow.”—D. B. Wilmeth, Choice

“In the developing field of Atlantic proletarian studies, and the associated study of minstrelsy and the minstrel stage, Jump Jim Crow is a milestone. Lhamon’s discovery of and scholarship upon the songs and plays is admirably painstaking and in many ways groundbreaking. He has made it easier to imagine this early stage of minstrelsy as a confluence of free-floating vernacular material with the local struggles among urban proto-classes; cliques, gangs, parties, and publics in the 1820s and ’30s. He has, in other words, built foundations under Constance Rourke’s intuition of sixty years ago that Jim Crow belongs with Crockett and Fink on the frontier—literally and figuratively—of the market revolution. Much of what has been theorized or imagined about the popular culture of the 1830s and ’40s from Rourke onwards emerges with new freshness and clarity in these texts, and some that has not yet been either theorized or imagined.”—Robert Cantwell, author of Bluegrass Breakdown and When We Were Good

“Scholars are belatedly coming to realize that minstrelsy is the source of much that we value in American vernacular music and much that we abhor in views that many white Americans have held and still hold toward African Americans. If we are to begin to understand either of these consuming issues, we must address minstrelsy. The topic is, in brief, of immense social, political, and cultural importance. Lhamon is the first to do full justice to the life, work, and politics of T.D. Rice, the most important early blackface minstrel, and his book is the first to collect in one resource extant plays and lyrics by Rice, many of which Lhamon has rediscovered. This book makes an important and impressive contribution to the field.”—Dale Cockrell, author of Demons of Disorder and Pasticcio and Temperance Plays in America