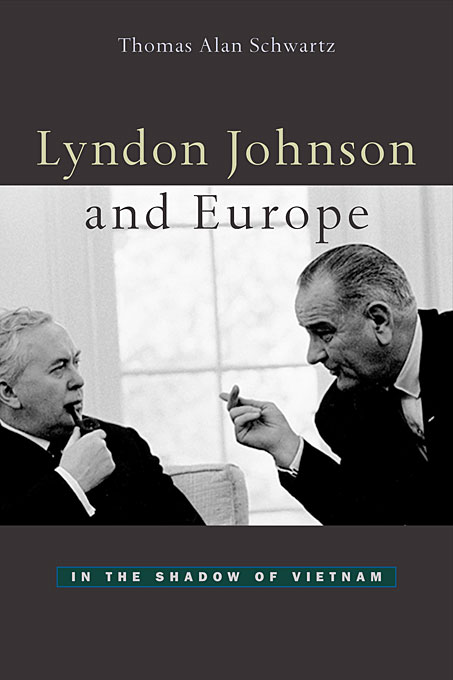 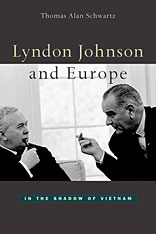 In the Shadow of Vietnam

“Schwartz’s carefully researched and thoughtfully presented history of Johnson’s European policy is not only fascinating for the light it casts on this enigmatic president; it also shows the degree to which today’s transatlantic tensions reflect permanent fault lines between Cold War partners.”—Walter Russell Mead, Foreign Affairs

“Though entitled “In the Shadow of Vietnam,” this welcome and necessary contribution to the scholarship of U.S.–European relations during the Johnson presidency demonstrates that there were many other issues beyond Vietnam that exercised the minds of LBJ and his advisers during the 1960s… Through his detailed exploration of the American response to the many problems thrown up in the maelstrom of the 1960s, Schwartz reveals a president who showed restraint and no little sensitivity and skill in his handling of the proud French leader, Charles de Gaulle, to prevent a serious rupture in the Atlantic alliance… This analysis of U.S.–European relations also provides a fascinating portrait of the foreign policymaking process and the ways in which the United States was and is still able to achieve its objectives abroad. Through his examination of the papers of presidential advises and diplomats, Schwartz reveals the influences on the conduct of US foreign policy and the significance of channels and links with agencies and institutions of foreign governments. Such transnational links enabled American officials to secure influence in the decision-making processes of other nations, thus achieving America’s objectives abroad. This most cogently argued and insightful study of U.S.–European relations in the 1960s is an invaluable source for policymakers and students of American foreign policy alike.”—Raj Roy, History

“Schwartz challenges the dominant view of most scholars that Lyndon Baines Johnson, the domestic politics guru, was uninterested, inept, incompetent, and ineffective in foreign policy, a perception enhanced by his Vietnam quagmire. Schwartz contends that Johnson did not separate domestic and foreign policy but always saw the two as part of the same whole, and that he became increasingly adept at shaping and controlling policy on the world stage… This is a first-class piece of scholarship and writing, a very important contribution that must be given utmost attention in any interpretation of the Johnson administration.”—J. P. Dunn, Choice

“Thomas Alan Schwartz gets it right. Even as Lyndon Johnson fought what he thought to be a necessary war in Vietnam, he knew America had other interests, the world had other imperatives, and Europe remained, potentially, the most dangerous place of all. In this important and well-researched book, Schwartz admirably begins the task of seeing Johnson—and his times—whole.”—Bill Moyers

“A superb historian has brought us a fascinating, groundbreaking and deeply researched work that explains important facets of Lyndon Johnson’s presidency that have heretofore gone largely unexplored. With Schwartz’s surefooted guidance, we can now fully understand how crucial LBJ’s approach to Europe turned out to be. This excellent book will change the way that scholars write about Johnson, his foreign policy, and his performance as diplomat-in-chief.”—Michael Beschloss, author of The Conquerors: Roosevelt, Truman and the Destruction of Hitler’s Germany

“Stereotypes fall by the wayside as Schwartz shows us a president with imagination and tact dealing with the tangled issues of German aspirations, Gaullist pretensions, nuclear proliferation, and the developing woes of the dollar crisis. Superbly researched and deftly written, this book will persuade readers to assess LBJ’s achievements outside the shadow of Vietnam.”—Lloyd C. Gardner, Rutgers University

“Lyndon Johnson and Europe turns on its head the conventional picture of an LBJ who was master of domestic policy but out of his depth in foreign affairs. In fascinating detail, Schwartz shows LBJ personally managing relations with Western Europe and the Soviet Union with skill and insight unmatched by either Kennedy or Nixon and Kissinger. A blockbuster reinterpretation!”—Ernest R. May, Kennedy School of Government, Harvard University

“This is a perceptive and intelligent study of an important topic: American policy toward Europe during the Johnson period. The subject has been largely ignored in the literature, but European questions were of absolutely central political importance during the Cold War period. Schwartz is reacting against the prevailing negative view of Johnson’s foreign policy, and makes a case based on a very serious, highly professional, and exceptionally honest analysis of the evidence. He has an eye for telling details, knows how to integrate them, and he writes very well indeed.”—Marc Trachtenberg, University of California, Los Angeles

“An excellent revisionist account of Lyndon Johnson’s European policy. Schwartz argues convincingly that LBJ was not the corn-pone provincial who neither understood nor cared about other societies. He learned on the job and after concentrating on the domestic successes of 1965, paid careful attention to Europe. This work is the first of several that will begin to place Lyndon Johnson and Vietnam in their proper historical contexts. Clearly and concisely written, this is diplomatic history at its best.”—Randall Woods, University of Arkansas