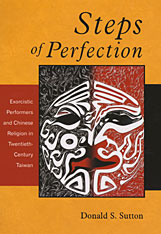 Despite Taiwan’s rise as an economic force in the world, modernity has not led to a Weberian process of disenchantment or curbed religiosity. To the contrary, other factors—social, economic, political—have stimulated religion. How and why this has happened are central issues in this book.

One part of Taiwan’s flourishing religious culture is the elaborate and colorful procession of local gods accompanied by troupes of musicians and dancers. Among them are performers with outlandishly painted faces portraying underworld generals who serve the gods and punish the living. Through their performances, these troupes claim to exorcise harmful forces from the community.

In conducting fieldwork among these troupes, Donald Sutton confronted their claims to a long history—when all evidence indicated that the troupes had been insignificant until the 1970s—and their assertions of devotion to tradition given the diversity of performances. Concentrating on the stylistic variations in performances, the author describes the troupes as organizations shaped by the “market forces” of supply and demand in the culture of religious festivals. By focusing on performances as the nexus of market and art, he shows how bodily performance is the site where religious statements are made and the power of the gods made visible.