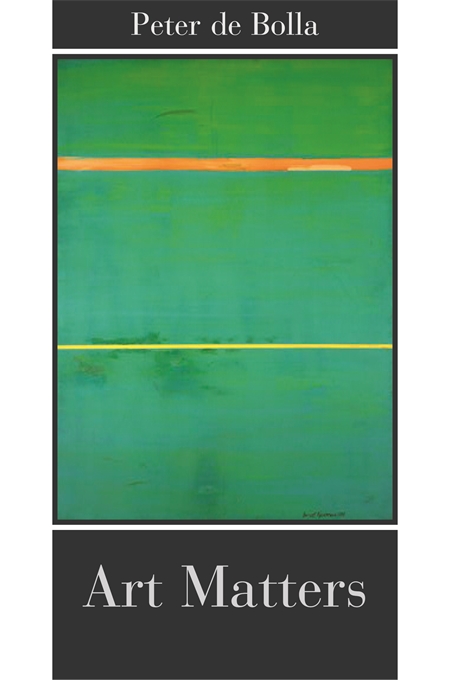 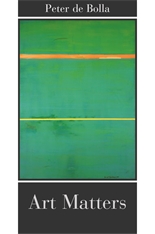 “As both a preparation for aesthetic experience and as a defense of art, Art Matters is unique—and uniquely good. De Bolla not only talks about art’s wonder, he makes us feel it.”—Tom D’Evelyn, The Providence Journal

“This book is of special interest because it shows a person of great sensitivity and intelligence experiencing some very difficult works of visual art, music, and literature… De Bolla is a sensitive listener. [This book is] challenging but appealing.”—R. E. Palmer, Choice

“Peter de Bolla’s book is a series of meditations on certain works of art (‘fragments from an aesthetic education’). He writes with originality and his prose is notable for its clarity—the matter is too serious to be spoiled by false rhetorical flourishes. The subtlety and honesty of his book is extremely impressive; his success may be, as he himself remarks, ‘hard won,’ but to the reader the book is a source of unmixed pleasure.”—Sir Frank Kermode

“Peter de Bolla’s Art Matters is an extraordinary description of and argument for the uniqueness of the aesthetic experience. Despite the inherent difficulty and complexity of this enterprise (in which aspects of musical performance, lyric poetry, and contemporary painting are described with great attentiveness) de Bolla has produced a grippingly refined and persuasive text, utterly free of sentimentality or cant, true, direct, original.”—Edward Said

“Art Matters is against intimidation. De Bolla’s ambition in this book is to show us just how generous art objects are, given a chance; and just how difficult it has become to experience our experience of them in the language available. There are stories to be told about the eloquence of being mute, and de Bolla has used his own aesthetic experiences to tell them. Art Matters is writing about art at its most telling. It is a remarkable book.”—Adam Phillips, Principal Child Psychotherapist, Wolverton Gardens Child and Family Consultation Centre, London

“Art Matters is an impressive tour de force that De Bolla can successfully deal with works in such varied media (painting, music, and poetry), and that he can make parallel claims about all three (in terms of their presentation of a kind of presence on the part both of the work and the person contemplating the work), even though in each case his reading is especially attentive to the materiality of the particular medium in question.”—Steven Shaviro, Professor of English, University of Washington

“This is a book which offers to return aesthetics to the encounter with the work of art, rather than the girds and programmes art is often supposed to fit. There are people, on the right and left, who argue that art is simply politics or ideology in disguise, and there are all kinds of (despairing or indifferent) people who think art is just entertainment hoisted into some kind of pantheon by professors and pundits. De Bolla wants to say, rightly, that art is far more than this, and far more intimate, interesting, and valuable than these caricatures would suggest. What he does is prove by example that speculative criticism can be personal and passionate, and by implication that only close encounters with particular works of any art will give us anything to talk about.”—Michael Wood, Professor of English, Princeton University