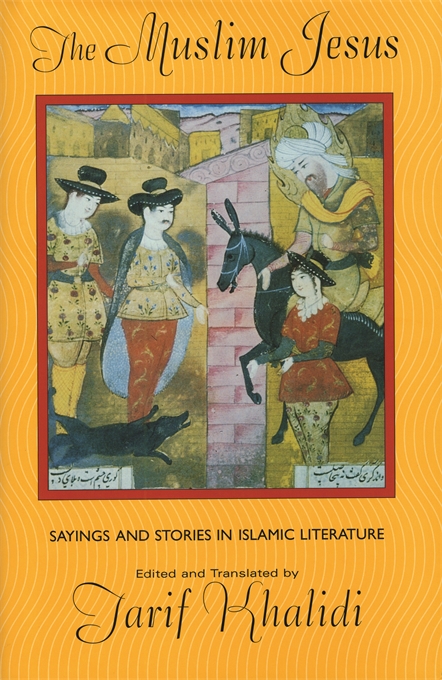 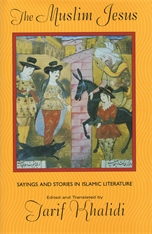 Sayings and Stories in Islamic Literature

Edited and translated by Tarif Khalidi

“Khalidi’s long introduction is a gem of graceful erudition and analytical wisdom, setting the stage for dozens of often surprising and always fascinating extracts which show all the numerous ways in which Muslims, while denying both Incarnation and Crucifixion, nevertheless have a deep-seated affection and reverence for Jesus.”—Edward W. Said, The Times Literary Supplement

“The Muslim Jesus is as fascinating as it is timely. The sayings are remarkable and often beautiful literary artifacts in their own right; but more importantly, they demonstrate that the links that bind Christianity and Islam are much deeper, more complex, and far more intricately woven, that most of us would expect… Now of all times, it should be welcomed as a book of the greatest importance.”—William Dalrymple, The Guardian

“Jesus captivated the Muslim imagination; in Islam, he is regarded as the last great prophet to precede Muhammad. Khalidi reminds us of the Middle Eastern milieu into which Islam arrived. Under a blazing desert sun, many of the world’s great traditions—Judaism, Christianity, Zoroastrianism—mingled in a vibrant, dynamic atmosphere. The proximity of so many religions bred, along with tolerance, unmistakable signs of each other’s influence… For many years, Khalidi engaged in scholarly archeology, poring over the Hadith for any sightings of Jesus. In The Muslim Jesus, he presents more than 300 stories and sayings… Consider one interesting East–West parallel aided by the book’s chronological format. In a 14th century collection by the lawmaker al-Subki, Jesus is still a cherished figure, instructing Muslims that ‘the rich shall not enter the kingdom of Heaven.’ About the same time, Dante consigned Muhammad to cruel suffering in ‘Inferno.’ We might explain such drastically different treatments by the fact that imperial Islam was flourishing while Western civilization was in turmoil. Today, with the situation reversed, the value of The Muslim Jesus is all the more evident. ‘Amid the current tensions between Christianity and Islam,’ Khalidi writes, ‘it is salutary to remind ourselves of an age and a tradition when Christianity and Islam were more open to each other, more aware of and reliant on each other’s wishes.’”—Nick Owchar, The Los Angeles Times

“This short book contains a millennium’s worth of sayings and stories of Jesus drawn from Islamic literature. The title may seem paradoxical; we are not accustomed to thinking of Jesus in Muslim contexts. Enter Tarif Khalidi, Sir Thomas Adams professor of Arabic and director of the Centre of Middle Eastern and Islamic Studies at King’s College… Khalidi proves to be an expert guide to this wealth of material. As a result, The Muslim Jesus is a book of spiritual connoisseurship with a timely and seductive appeal… The Muslim Jesus is handsomely produced. Its pages are well designed and spacious. They invite the eye to linger and the mind to ruminate. Tarif Khalidi has not only risen to the occasion of our present discontents, he has transcended it and lifted the heart beyond sorrow and distraction to delight.”—Thomas D’Evelyn, The Christian Science Monitor

“The Muslim Jesus is a very good book. Khalidi writes in eloquent yet never pompous English…always striving to be comprehensible to the nonspecialist. Moreover, he has done valuable work simply in collecting, annotating, and translating his material. Thereafter, he lets the material about Jesus speak for itself, in order (I think) to make an important point: that the Jesus of Islam is a creation of Islam. In Khalidi’s words, the Muslim Jesus is ‘a compound image,’ a figure ‘resurrected in an environment where he becomes a Muslim prophet.’ Thus, Khalidi explains, a wide range of Muslim authors used the figure of Jesus as a spokesman for their cause, be it asceticism, quietism, Shi’ism, or anti-Christian polemic… Khalidi is to be congratulated for collecting this material and presenting it in a clear and accessible manner. He has also included a complete bibliography of Arabic sources for the specialist and detailed endnotes with the most important secondary literature for the specialist and nonspecialist alike. Khalidi might also be thanked for writing a book remarkably free of the arrogant tone and the gratuitous attacks on earlier scholars that seem to plague the field of Islamic studies.”—Gabriel Said Reynolds, Books & Culture

“In his fascinating book The Muslim Jesus, Tarif Khalidi brings together, from a vast range of sources, 303 stories, sayings and traditions of Jesus that can be found in Muslim literature, from the earliest centuries of Islamic history. These paint a picture of Christ not dissimilar to the Christ of the Gospels. The Muslim Jesus is the patron saint of asceticism, the lord of nature, a miracle worker, a healer, a moral, spiritual and social role model.”—Mehdi Hasan, New Statesman

“[The Muslim Jesus] helps dispel the ignorance among Christians about Islam. It is a collection of Islamic sayings about Jesus in the Koran and Islamic literature… With a little perseverance, the reader is rewarded with a better understanding of Islam, and an appreciation of how one of the most central figures in Western civilization—Jesus of Nazareth—is perceived by another tradition.”—Larry B. Stammer, The Los Angeles Times

“Tarif Khalidi, professor of Arabic at the University of Cambridge, has assembled a very valuable collection of sayings and stories—303 in number—of Jesus in Arabic Islamic literature. The sources scanned reach from the second to the twelfth Islamic centuries. The book consists of a comprehensive and illuminating fifty-page introduction, the 303 items in chronological order of their sources, and brief helpful comments (on sources, parallels, and function in Islamic discourse) appended to each item… Before Khalidi’s efforts, the basic corpus of the ‘Muslim gospel’ used to be a collection of 225 sayings by the Spanish scholar Miguel Asín y Palacios who translated the sayings into Latin (!) and provided brief Latin commentaries on them… Khalidi’s collection will now replace that one for those of us whose needs are served by good translations… [The Muslim Jesus] is a great accomplishment, rewarding reading for anyone interested in Islam and in religious transculturation.”—Heikki Räisänen, Journal of Biblical Literature

“From the Qur’an on, Jesus has always had a special place in Muslim piety as Khalidi (professor of Arabic at Cambridge University) shows in his exemplary study, The Muslim Jesus… The 303 snippets that Khalidi translates and comments on from a wide range of sources (hadith, belles-lettres, mystical works, etc.) do convincingly establish his point that ‘In his Muslim habitat, Jesus becomes an object of intense devotion, reverence, and love.’”—Middle East Quarterly

“The Muslim Jesus: Sayings and Stories in Islamic Literature is the English translation of the largest collection ever published for a western readership of the sayings and stories of Jesus as found in Arabic Islamic literature. A unique and invaluable resource for the study of Jesus’ role and position within an Islamic context… Tarif Khalidi’s informative introduction and commentaries place the sayings and stories within an historical context… The Muslim Jesus is an indispensable and greatly appreciated addition to Islamic Studies.”—The Midwest Book Review Bookwatch

“Jesus figures prominently in Islam. Alongside the hadiths, the stories of the Prophet’s sayings and actions, appear stories of Jesus’ sayings and actions, 303 of which Tarif Khalidi has collected and translated to produce, for the first time, a Muslim gospel. Some of the sayings reflect certain of Jesus’ sayings in the Christian gospels, while others probably derive from pre-Islamic ascetics and heroes… Khalidi’s efforts bring a…[great] diversity of Muslim beliefs about Jesus into the book. To each story, Khalidi appends astute analysis, and a lengthy general introduction provides a historical and functional overview of the Muslim understanding of Jesus. An unique and important addition to the corpus of writings about Jesus.”—John Green, Booklist

“Tarif Khalidi brings together Islamic primary sources about Jesus from the eighth to eighteenth centuries. Included are mystical works, historical texts about prophets and saints and, of course, the foundational words about Jesus in the Qur’an…the literary quality of the texts and the role ‘the Muslim Jesus’ has played in both Muslim piety and Muslim–Christian relations.”—Publishers Weekly

“Ascetic saint, lord of nature, miracle worker, healer, social and ethical model: such is the figure of Jesus in Professor Khalidi’s ‘Muslim gospel.’ A figure of universal reach and resonance, the object of a ubiquitous and all-too-human religious sentiment unfettered by sectarian affiliation, the Jesus of Muslim penitential and sententious literature assembled by Tarif Khalidi is particularly salutary today.”—Aziz Al-Azmeh, Zayed Professor of Islamic Studies at the American University of Beirut, author of Muslim Kingship: Power and the Sacred in Muslim, Christian, and Pagan Polities

“Despite the stereotypes and ignorance that have sometimes marred it, the long relationship between Christians and Muslims has also been mutually appreciative and productive. Both traditions have, for centuries, shared a love for the prophet of Galilee. Now for the first time we have The Muslim Jesus, a previously uncollected compendium of stories and sayings of Jesus from Muslim sources, some of them over a millennium old. This invaluable classroom resource will also enrich the present lively dialogue between the two fraternal faiths.”—Harvey Cox, author of The Secular City and Fire from Heaven

“The 300-odd logia are enormously impressive, reminiscent of the Nag Hammadi corpus as well as of the Gospels, especially the Sermon on the Mount, yet altogether distinctive. The combination of sublime moralist and magician is striking, and so is the virtual exclusion of reference to the Crucifixion. The author’s introduction makes the general history easily intelligible.”—Frank Kermode, author of Shakespeare’s Language

“Tarif Khalidi’s commentary and compilation of Muslim depictions of Jesus is a remarkable, eye-opening work of deep scholarship, profound religious understanding, and unprecedentedly rich cross-cultural exchange. A work as full of novelty as it is of wonderful illumination, Khalidi’s effort to show how one major religion adopted and loved the central figure of another religion establishes him as one of the foremost Islamic scholars of our time. This book is a pleasure to read, accessible to generalists and to those for whom bellicose claims about the clash of civilizations are as unsatisfactory as they are false.”—Edward W. Said, author of Reflections on Exile and Other Essays