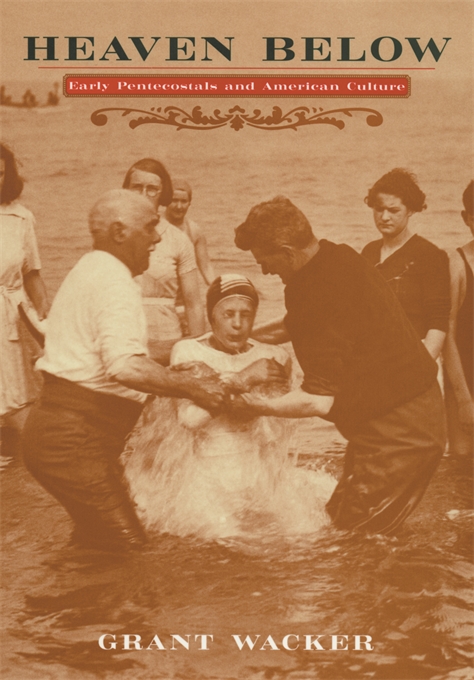 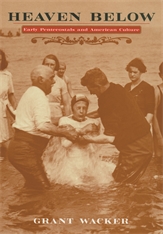 “Even serious, sympathetic studies reinforced the popular impression that Pentecostalism was the expression of poorly educated and socially marginal people, outcasts who grasped an exuberant faith as an escape from their miseries or found in it the meaning and discipline to make that escape effective. Challenging this premise is one of the remarkable accomplishments of Grant Wacker… His meticulous review of the data leads to a different, and in some sense surprising, conclusion: ‘Contrary to stereotype, the typical convert paralleled the demographic and biographical profile of the typical American’… Heaven Below is a historical ethnography, examining topics like authority, rhetoric, worship and prohibitions, and attitudes towards finances, education, women and race.”—Peter Steinfels, The New York Times

“In Heaven Below, Grant Wacker offers a comprehensive, fact-laden and readable account of the birth of Pentecostalism in the early 20th century. Believers embraced the ‘four-fold’ gospel of personal salvation, Holy Ghost baptism, divine healing and the imminent return of Jesus. Wacker has strayed a bit from the faith of his parents and grandparents, with ties not to the United Methodist Church. But it’s not a total backslide: ‘I guess the most honest way to explain my relation to the Pentecostal tradition is to say that I am a pilgrim with one leg still stuck in the tent.’”—Colman McCarthy, The Washington Post Book World

“Both Wacker’s approach and his thesis break new ground. The approach values the ordinary as much as the privileged, and the thesis explains how people sustained by otherworldly immediacy succeeded so remarkably in the here-and-now… Wacker’s careful work in primary sources is both welcome and needed. His extensive documentation is not just the mark of a competent historian; it is also the power of his book. In the sources Wacker overhears many ‘yes…buts,’ and he keeps listening when other scholars have tended to stop. Sometimes he finds speakers manifesting endearing traits; sometimes he is repulsed. His sympathy—or at least his ability to empathize—is apparent, but so it his careful sensitivity to the nuancing that keeps sympathy from dulling critical scholarship… [Wacker] reveals the world of early Pentecostalism from within, in all its aspects, and allows readers to draw their own conclusions. One can’t ask anything more of a historian.”—Edith Blumhofer, Books & Culture

“Unlike other histories of Pentecostalism, Wacker uses the letters, journal entries, newspaper articles, and other writings of the believers themselves as he examines the rise and development of the movement. With a blend of thorough scholarship, lively detail, and elegantly crafted prose, Wacker provides us with an enlightening glimpse into the history of Pentecostalism in this first-rate history of American religion.”—Henry L. Carrigan, Jr., The Christian Science Monitor

“A rich account of the inner lives of ordinary men and women who felt themselves filled with the power of the Holy Ghost. A comprehensive ethnography of the first generation of Pentecostals, their faith, their social attitudes and their politics, which illuminates the origins of this influential current in American culture.”—The Arizona Daily Star

“Wacker brings a matter-of-fact honesty to his account of the early years of American Pentecostalism, which covers roughly 1900 to 1925. While the book is exhaustively researched, Wacker’s writing does not suffer from academic turgidity. At the same time, while he is sympathetic to the hopes and dreams of his subjects, he maintains a scholarly distance.”—Zachary Karabell, The Los Angeles Times

“Despite copious adherents and a growth curve that defies trends in most masculine groups, Pentecostals remain largely misunderstood by both the general public and their fellow Christians. Wacker endeavors to develop an understanding of this movement in this study of its early history… Scholars will find Wacker’s research thorough, yet his writing is accessible to a popular audience… Highly recommended.”—R. Watts, Choice

“Wacker…gives an in-depth, well-researched look at the history, beliefs, and everyday lives of early Pentecostals (1900–1925). He discusses their culture, temperament, taboos, use of time, organizational skills, and leadership. While exploring the boundaries that separate the Pentecostals from mainstream U.S. society, he also shows how only a minority fit the stereotype of poor and alienated folk. The genius of the Pentecostal movement, Wacker states, lies in its ability to hold two seemingly incompatible impulses—the primitive and the pragmatic—in productive tension. Recommended for cultural and theological collections.”—George Westerlund, Library Journal

“In this remarkable study, Wacker, raised a pentecostal and now a respected historian at Duke University, devastates the standard stereotypes… What emerges instead is a remarkably rich account of the inner lives of ordinary men and women who felt themselves filled with the power of the Holy Ghost. In 15 tightly organized chapters, Wacker offers a comprehensive ethnography of the first generation of pentecostals—their faith, their social attitudes and their politics. He leads the reader through enchanted landscapes populated by angels and demons, pauses to assess reports of xenolalia (speaking in a human language allegedly unknown to the speaker) and surveys the gulfs that have divided charismatics from their detractors. It is difficult to imagine a more judicious treatment of the subject; meticulously researched, lyrically written and continuously illuminating. Wacker’s book is essential reading for anyone who wishes to understand the origins of this influential current in American culture.”—Publishers Weekly