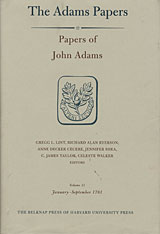 In mid-March 1781, John Adams received his commission and instructions as minister to the Netherlands and embarked on the boldest initiative of his diplomatic career. Disappointed by the lack of interest shown by Dutch investors in his efforts to raise a loan for the United States, Adams changed his tactics, and in a memorial made a forthright appeal to the States General of the Netherlands for immediate recognition of the United States. Published in Dutch, English, and French, it offered all of Europe a radical vision of the ordinary citizen’s role in determining political events. In this volume, for the first time, the circumstances and reasoning behind Adams’s bold moves in the spring of 1781 are presented in full.

In July the French court summoned Adams, the only American in Europe empowered to negotiate an Anglo–American peace, to Paris for consultations regarding an offer made by Austria and Russia to mediate the Anglo–French war. In his correspondence with France’s foreign minister, the Comte de Vergennes, Adams passionately insisted that the United States was fully and unambiguously independent and sovereign and must be recognized as such by Great Britain before any negotiations took place. This volume shows John Adams to be a determined and resourceful diplomat, unafraid to go beyond the bounds of traditional diplomacy to implement his vision of American foreign policy.