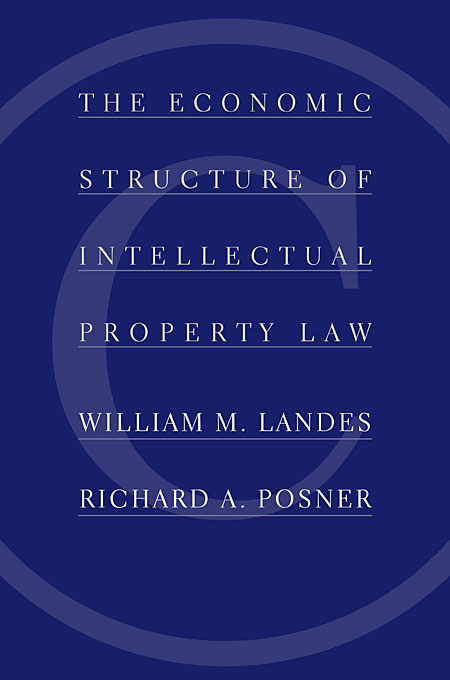 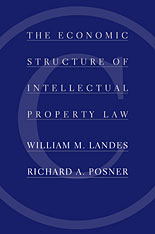 “Chicago law professor William Landes and his polymath colleague Richard Posner have produced a fascinating new book… [The Economic Structure of Intellectual Property Law] is a broad-ranging analysis of how intellectual property should and does work… Shakespeare’s copying from Plutarch, Microsoft’s incentives to hide the source code for Windows, and Andy Warhol’s right to copyright a Brillo pad box as art are all analyzed, as is the question of the status of the all-bran cereal called ‘All-Bran.’”—Nicholas Thompson, The New York Sun

“Landes and Posner, each widely respected in the intersection of law and economics, investigate the right mix of protection and use of intellectual property (IP)… This volume provides a broad and coherent approach to the economics and law of IP. The economics is important, understandable, and valuable.”—R. A. Miller, Choice

“Given the immense and growing importance of intellectual property to modern economies, this book should be welcomed, even devoured, by readers who want to understand how the legal system affects the development, protection, use, and profitability of this peculiar form of property. The book is the first to view the whole landscape of the law of intellectual property from a functionalist (economic) perspective. Its examination of the principles and doctrines of patent law, copyright law, trade secret law, and trademark law is unique in scope, highly accessible, and altogether greatly rewarding.”—Steven Shavell, Harvard Law School, author of Foundations of Economic Analysis of Law

“Intellectual property is the most important public policy issue that most policymakers don’t yet get. It is America’s most important export, and affects an increasingly wide range of social and economic life. In this extraordinary work, two of America’s leading scholars in the law and economics movement test the pretensions of intellectual property law against the rationality of economics. Their conclusions will surprise advocates from both sides of this increasingly contentious debate. Their analysis will help move the debate beyond the simplistic ideas that now tend to dominate.”—Lawrence Lessig, Stanford Law School, author of The Future of Ideas: The Fate of the Commons in a Connected World

“An image from modern mythology depicts the day that Einstein, pondering a blackboard covered with sophisticated calculations, came to the life-defining discovery: Time = $$. Landes and Posner, in the role of that mythological Einstein, reveal at every turn how perceptions of economic efficiency pervade legal doctrine. This is a fascinating and resourceful book. Every page reveals fresh, provocative, and surprising insights into the forces that shape law.”—Pierre N. Leval, Judge, U.S. Court of Appeals, Second Circuit

“The most important book ever written on intellectual property.”—William Patry, former copyright counsel to the U.S. House of Representatives, Judiciary Committee