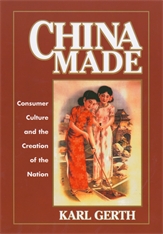 Consumer Culture and the Creation of the Nation

“Chinese people should consume Chinese products!” This slogan was the catchphrase of a movement in early twentieth-century China that sought to link consumption and nationalism by instilling a concept of China as a modern “nation” with its own “national products.” From fashions in clothing to food additives, from museums to department stores, from product fairs to advertising, this movement influenced all aspects of China’s burgeoning consumer culture. Anti-imperialist boycotts, commemorations of national humiliations, exhibitions of Chinese products, the vilification of treasonous consumers, and the promotion of Chinese captains of industry helped enforce nationalistic consumption and spread the message—patriotic Chinese bought goods made of Chinese materials by Chinese workers in factories owned and run by Chinese.

In China Made, Karl Gerth argues that two key forces shaping the modern world—nationalism and consumerism—developed in tandem in China. Early in the twentieth century, nationalism branded every commodity as either “Chinese” or “foreign,” and consumer culture became the place where the notion of nationality was articulated, institutionalized, and practiced. Based on Chinese, Japanese, and English-language archives, magazines, newspapers, and books, this first exploration of the historical ties between nationalism and consumerism reinterprets fundamental aspects of modern Chinese history and suggests ways of discerning such ties in all modern nations.