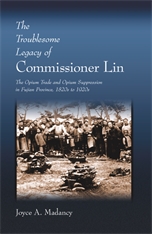 The Troublesome Legacy of Commissioner Lin

The Opium Trade and Opium Suppression in Fujian Province, 1820s to 1920s

In 1908, a very public crusade against opium was in full swing throughout China, and the provincial capital and treaty port of Fuzhou was a central stage for the campaign. This, the most successful attempt undertaken by the Chinese state before 1949 to eliminate opium, came at a time when, according to many historians, China’s central state was virtually powerless. This volume attempts to reconcile that apparent contradiction.

The remarkable, albeit temporary, success of the anti-opium campaign between 1906 and 1920 is as yet largely unexplained. How these results were achieved, how that progress was squandered, and why China’s opium problem proved so tenacious are the questions that inspired this volume. The attack on this social problem was led by China’s central and provincial authorities, aided by reformist elites, and seemingly supported by most Chinese. The anti-opium movement relied on the control and oversight provided by a multilayered state bureaucracy, the activism and support of unofficial elite-led reform groups, the broad nationalistic and humanitarian appeal of the campaign, and the cooperation of the British government. The extent to which the Chinese state was able to control the pace and direction of the anti-opium campaign and the evolving nature of the political space in which elite reformers publicized and enforced that campaign are the guiding themes of this analysis.