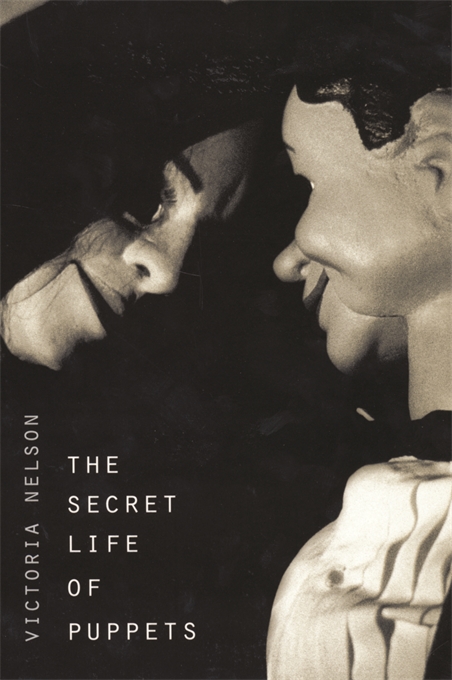 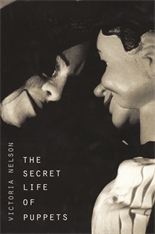 The Secret Life of Puppets

“In a remarkable scholarly book, The Secret Life of Puppets, Victoria Nelson argues that our sense of the supernatural and yearning for immortality has been displaced from religion to such expressions of popular culture as superheroes, robots and cyborgs.”—Francisco Goldman, New York Times Magazine

“The Secret Life of Puppets explores the hauntings, possessions, and other uncanny phenomena proliferating in literature and entertainment (and by no means only on the margins); she argues strongly, through vivid and original readings of H.P. Lovecraft, Edgar Allan Poe and many artifacts in a variety of media, for a new approach to the uses of fantasy and to the relationship between material and immaterial phenomena.”—Marina Warner, Times Literary Supplement

“From Harry Potter and Lord of the Rings, A.I. and X-Files, to the genre grotesqueries of Child’s Play and The Puppet Master, so much of our popular storytelling concerns forces and phenomena our culture firmly insists aren’t real and cannot exist… In a dizzying and fascinating alternate history scored with subterranean connections, Nelson presents alchemists, Platonists, Gnostics and magi in their own terms and contexts… In this rich work of erudite charms, Nelson convincingly argues that the cultural pendulum is swinging back to the platonic side. But because our rigid scientific materialism doesn’t allow us to take any of this seriously, we are left with mostly unconscious expressions that overemphasize the sensational and horrific dark side, with a little sentimental New Age nod to the latent good.”—William S. Kowinski, San Francisco Chronicle

“In the opening chapter, Victoria Nelson issues a caveat that deliberately echoes the warnings that preface tales of horror. Do not expect to emerge unchanged. To read this book is akin to entering an ancient grotto, the ante-chamber of the otherworld. Since the Enlightenment, says Nelson, Western culture has dismissed the supernatural as mere superstition and displaced these religious impulses into popular entertainments such as fantasy and science fiction. The emergence of new grottos such as cyberspace are signs that we are entering a new era of sensibility, in which the Platonic and Aristotelian world view can coexist. As a diagnosis of the role of the supernatural in modern secular society, this is a work of extraordinary originality, erudition and flair. Read it and be transformed.”—Fiona Capp, The Age

“Freud theorized that modern civilization (the one in which he lived, anyway) repressed our sexual instincts. In her provocative new book, The Secret Life of Puppets, Victoria Nelson contends that modern civilization has repressed our spiritual instincts. And these, she argues, like all repressed instincts, have come back to surprise us in strange new forms.”—Merle Rubin, Christian Science Monitor

“Translating ancient thought systems into contemporary terms, finding equivalents of the old in the new, Nelson skillfully manages to thrust the sphere of academic research headlong into popular culture, making this both accessible and erudite… In a dizzying journey that opens with a Renaissance grotto and concludes with The Truman Show and virtual reality, we are taken on a rollercoaster ride through the underside of western mysticism. As Nelson herself warns the reader, when crawling out from the ‘hole of this book’, whatever emerges ‘will not be the same as what went in.’”—Aura Satz, Financial Times

“This is no ordinary work of intellectual history… This is New Age prophecy at its most verbally sexy and literarily savvy. It is fun, enticing, and chock full of brilliance.”—Laura Bass, Washington Times

“Some books are fated and fêted for cult status. They have a particular feel and fervency about them. The Secret Life of Puppets by Victoria Nelson, a writer on writing…seems like one of those uncanny, unclassifiable books that break the mould and promise to have a market appeal across disciplines and hobbies, among sober seekers after enlightenment as well as cranks… Nelson’s breathtaking jaunt through the underground of Western culture is certainly illuminating and sometimes intoxicating… Expertly researched, forcefully written, magnificently produced, The Secret Life of Puppets is a haunting, highly charged book that leaves a strong after-image of worlds within worlds.”—William Keenan, Journal of Contemporary Religion

“Nelson plots an illuminating journey through a carnival funhouse… Unlike many similar, wide-ranging culture studies, Nelson’s book arrives with no agenda, blaming no one; instead, she offers a learned, exciting ride through a phantasmagoric landscape filled with dark mysteries.”—Publishers Weekly

“Nelson has written an eloquent, exciting, memorable, important book. It is alive and disturbingly truthful.”—Harold Bloom, author of The Western Canon and Shakespeare: The Invention of the Human

“This is a book of powerful psychic allure: it consistently engages and challenges; one is pushed into new intellectual spheres by its very oddity and force. It is also spectacularly well-written on a sentence-by-sentence level. Nelson is a prose stylist of sometimes lyric and touching penetration.”—Terry Castle, author of The Female Thermometer and The Apparitional Lesbian

“A wonderful, unlikely, necessary book which links high and low and pop culture, the sacred and the profane, into a magnificent webwork of pattern and gnosis—it is erudite, irreverent, and profound. Just read it.”—Neil Gaiman, author of American Gods

“Much more than intellectual history and literary criticism, Victoria Nelson’s The Secret Life of Puppets is a provocative, important and exciting thesis about why organized Western religion is no longer the residence of religion. In a convincing series of essays, Nelson demonstrates how the sacred and our yearning for the transcendent has now reappeared in art, film and all manner of simulacra—yes, and even in puppets. This is required reading for any serious student or teacher of religion.”—Rabbi Lawrence Kushner, author of God Was In This Place, I, I Did Not Know, and Invisible Lines of Connection

“The Secret Life of Puppets is one of the most important and inspiring books I’ve read in many years. Ranging widely in the imagination of Western culture, it shows wisely how the human soul went into eclipse, where it remained hidden, and how it might return. The language is fresh, the ideas original. Each page has at least one summary sentence, beautifully compact, that offers a way out of the scientism and displaced notions of transcendence that have chased the life out of modern experience. Drawing on a largely neglected tradition of Neoplatonic and magical thought, it opens up key themes of religion and literature that lie hidden in popular culture and high art.”—Thomas Moore, author of Care of the Soul and The Soul’s Religion