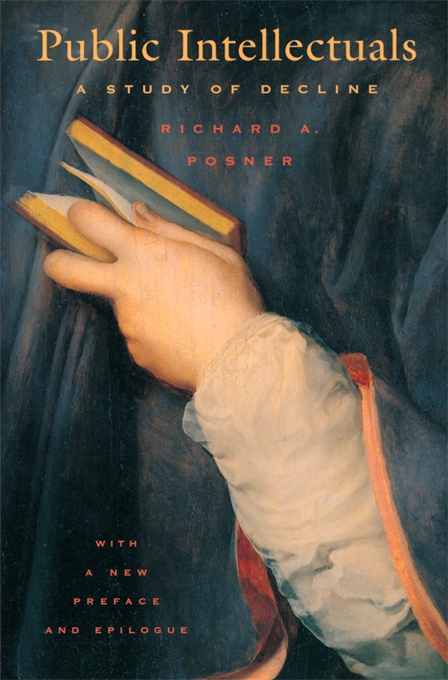 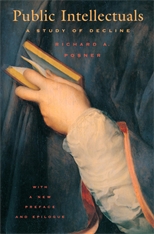 A Study of Decline, With a New Preface and Epilogue

“Posner is, despite it all, a marvel. He is hyperactive like Harold Bloom, audacious like Christopher Hitchens and a practical man of the world like Alan Greenspan. About how many Americans can that be said? So he deserves attention no matter how infuriating he can be. Moreover, he charges gaily into the fray, voraciously aware of his own superiority.”—David Brooks, The New York Times Book Review

“It is an intense and often angry book, a high-spirited, richly provocative moral diatribe against trivialization of the national culture… This is an intense and studious book—brilliant with energy, commitment and proper zeal… Posner’s mind is so acute and often so surgically ironic that his prose can be delightful.”—Michael Pakenham, The Baltimore Sun

“In Public Intellectuals…Posner trashes fellow smarties who expound on public issues outside their expertise. He says they abandon rigor when they write general interest books and op-ed pieces, publish open letters, and speak on television. They are in decline, he says, because more of them than ever have safe jobs as professors, protecting them from the consequences of bad predictions and stupid proclamations… Posner fires both left and right, nearly always hitting the mark.”—Peter Coy, Business Week

“In Public Intellectuals Posner turns his poison pen on scores of public intellectuals, including the likes of Noam Chomsky, Edward Luttwak, and Paul Ehrlich, those ‘talking heads’ who disseminate their thoughts to the wider public on issues of political and ideologically import. Of particular interest are environmental decay, the darker side of realpolitik, the Monica Lewinsky scandal, former President Bill Clinton’s impeachment, and the deadlocked 2000 presidential election. Through the application of market economics and statistical analysis, Posner first identifies the seemingly endless supply of and demand for public intellectuals to pontificate on these matters and their various genres… He also highlights the fact that market discipline is sorely lacking… [Posner’s] marshaling of arguments, combined with his copious footnotes and extensive source material, makes for an engaging and thought-provoking read.”—Peter McKenna, The Christian Science Monitor

“The marketplace in ideas is no mere phrase to Mr. Posner, an alarmingly prolific federal judge, author and scholar who has decided that the traffic in opinions can be usefully described in economic terms, with numerical values assigned to dozens of opinion-mongers who offer their wares in the great media bazaar. The book has been catnip to journalists and intellectual scorekeepers, who have been bickering over the standings for weeks. The ups and downs of American intellectuals, especially the New York variety, fascinates the more bookish part of the population in the same way that college football rankings or Baseball Hall of Fame elections mesmerize sports fans.”—William Grimes, The New York Times

“[Posner] writes faster than you can read. And he’s a public intellectual in the specialized sense he describes and decries in his book: a ‘critical commentator addressing a nonspecialist audience on matters of broad public concern’… Judge Posner’s main argument is that ‘public intellectuals are often careless with facts and rash in prediction.’ They lack, moreover, ‘insight and distinction, the filling of some gap in intellectual space’… Posner’s writing is indeed limpid and muscular, but it’s grounded (the celebrity-intellectuals tables notwithstanding) in substantial evidence carefully marshaled into showy and sometimes pedantic footnotes. His conclusions follow from his fully disclosed, if controversial, analytical methodology.”—Adam Liptak, The New York Observer

“Richard Posner is a polymath, a one-man think tank, the grown-up version of the kid who always sat in the front row and knew the answer to the teacher’s questions… The latest of his countless books is an occasionally insightful, often maddening effort to kill off all rival claimants to the throne.”—Gary Rose, The Wall Street Journal