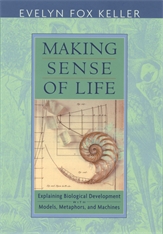 “Making Sense of Life is about the importance of recognizing [the] tight connection between the use of language in the social domain and how it produces biological ‘understanding’… The central arguments of Making Sense of Life are made with grace and authority. Those who are unsettled by them, and who wish to take issue with Keller, could not ask for a more accomplished and eloquent adversary.”—Lisa Jardine, New Scientist

“Evelyn Fox Keller, once a mathematical physicist but now primarily a historian of biology, has analyzed the varied attempts of 20th-century biologists to provide an explanation for the nature and origin of life… Keller’s achievement is to historicize 20th-century biological concepts, so that we can begin to see that they are not inevitable, springing directly from a realization of ‘how nature is’, but rather are culturally located, and shaped by complex social forces.”—Steven Rose, The Lancet

“Keller writes beautifully, explains exquisitely, does a really good job of showing how today’s four-dimensional color gene-product-marked embryo pictures, available to all on the Web, have answered most of the old questions…and how they have generated a whole new set: about artificial life, about complex systems and emergence, about what we want to understand development for… I hope she finds a new generation of biology students, as well as historians, who’ll appreciate her subtle thinking; this book makes sense of embryology at last.”—Jack Cohen, Biologist

“A terrific book full of thought-provoking and original ideas and observations. Keller’s discussion of ‘explanation’ in the life sciences is easily one of the very best and most interesting treatments of this topic that I have ever read.”—Jim Woodward, J. O. and Juliette Koepfli Professor of the Humanities, California Institute of Technology