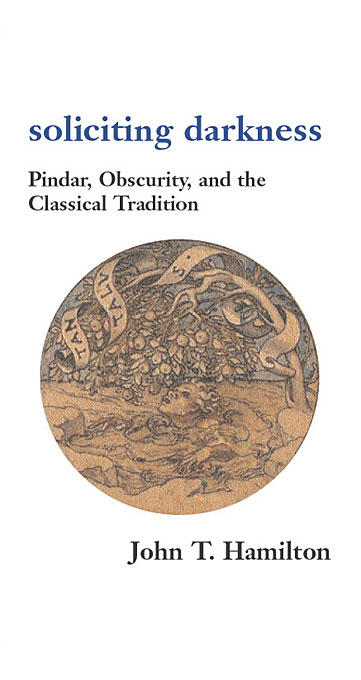 Pindar, Obscurity, and the Classical Tradition

“Hamilton ranges with impressive breadth over the history of the European reception of Pindar, represented by scholars such as the great Prussian philologist Wilamowitz and literary admirers from Goethe to Hölderlin… Hamilton, however, insists that Pindar’s darkness, as well as constituting an integral part of his reception by poets, wholly resists scholarly efforts to illuminate it, and should be seen (as it were) for what it is.”—Armand D’Angour, The Times Literary Supplement

“[Hamilton] has fully accomplished his aim of providing an overview of the entire history of European thought according to Pindar… The study will be of interest to scholars concerned with the literary reception of antiquity and to those who pursue literary studies in general. The latter will be stimulated to further reflection on whether a poetical concept of darkness might be defined by more precise terminology.”—Gregor Staab, Bryn Mawr Classical Review

“This is a marvelous book… The reader quickly sees both how and why classical texts in general and Pindar’s poetry in particular have proved so influential in European culture and remain so vital to our whole concept of literature and civilization in the modern world.”—John Godwin, Journal of Classics Teaching

“[Hamilton] controls not only German but also Greek and Latin, thus yielding a book of extraordinary interest. Hamilton is concerned largely with the reception of Pindar in Europe from Horace until Wilamowitz, with obvious emphasis on Germany and France. His lucid style avoids jargon and he has an enviable ability to translate the abstractions of Hegel, Schopenhauer and Kant into intelligible English… German and Greek passages are regularly and elegantly translated. We find welcome insights on performance. There is a fine bibliography… Teachers of Pindar will find much to enrich their lectures here. I warmly recommend their purchasing the book.”—William M. Calder II, Religious Studies Review