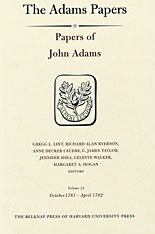 The American victory at Yorktown in October 1781 and the fall of Lord North’s ministry in March 1782 opened the possibility that John Adams might soon be involved in negotiations to end the war for American independence. To prepare for the occasion, Adams and Benjamin Franklin discussed in their letters the fundamentals for peace. Adams made it clear to the British government that there would be no negotiations without British recognition of the United States as independent and sovereign.

This volume chronicles Adams’s efforts, against great odds, to achieve formal recognition of the new United States. The documents include his vigorous response to criticism of his seemingly unorthodox methods by those who would have preferred that he pursue a different course, including Congress’s newly appointed secretary for foreign affairs, Robert R. Livingston.

In April 1782 the Netherlands recognized the United States and admitted John Adams as its minister. For Adams it was “the most Signal Epocha, in the History of a Century,” and he would forever see it as the foremost achievement of his diplomatic career. The volume ends with Adams, at long last a full-fledged member of the diplomatic corps, describing his reception by the States General and his audiences with the Prince and Princess of Orange.