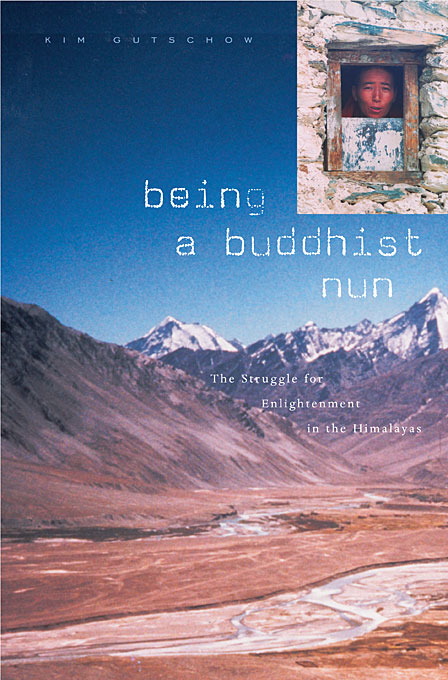 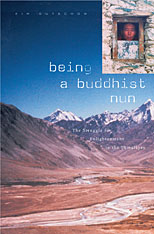 Being a Buddhist Nun

The Struggle for Enlightenment in the Himalayas

“Being a Buddhist Nun is a valuable account of the life of nuns in the Himalayan valley of Zanskar, a region of Ladakh in north-west India. The work is driven by a deep sense of injustice and a compelling focus on a remote society still medieval in character… [Gutschow] present[s] an unrivalled account of monastic economy and social anthropology in Ladakh. Her text is full of ‘thick’ description, delightful anecdotes, biographies of courageous and not so courageous nuns, as well as accounts of the personal joys and sufferings of individuals. Although she focuses on the often lamentable ways in which nuns suffer discrimination, she is not unduly disrespectful of the monastic system to which they belong; rather she subjects it to a prolonged and penetrating examination and interpretation.”—John Crook, The Times Literary Supplement

“Based on [Gutschow’s] observations and research in Zangskar, the book describes a rigid hierarchy in which monks rule, enjoying power and prestige and conducting important ceremonies and rituals, such as blessing households and construction sites in their villages. Nuns, who must defer to monks and sit behind them at formal gatherings, are relegated to menial tasks, such as collecting the dung and sticks that the entire community will burn for fuel during the region’s harsh winters.”—Anne Stuart, Harvard Magazine

“In many religions, such as Christianity, Judaism, and Hinduism, women are considered spiritually inferior to men and often suffer inequitable treatment in the wider society. Buddhism, with its highly egalitarian doctrine, is often perceived as being different. Gutschow shows that in this regard we have mistakenly focused on ideals rather than on actual practices.”—James F. DeRoche, Library Journal

“The inescapable struggle of being a woman in a patriarchal system is the heart of Gutschow’s work and permeates her further discussions, including ideologies of purity and pollution and Tantric approaches to the question of female enlightenment… Gutschow’s analysis is penetrating, and her supporting anecdotes are often vivid and effective. Her work reveals that the reality of Himalayan Buddhist monasticism, far from being Shangri-La, is thoroughly rooted in the very foibles of the world it professes to renounce.”—Publishers Weekly

“Being a Buddhist Nun is a persuasive and moving combination of vivid writing and sophisticated scholarship. The lived experience is wonderfully captured in both verbal and visual thick descriptions of foods, tasks, conversations, all the evocative phenomena of the everyday, while the book raises questions that are significant far beyond the Himalayas, ranging from the usual questions of gender—Why Cannot Nuns Be Monks?—for which Kim Gutschow offers new answers, to the not-so-usual questions of celibacy, in which she sees newly relevant values.”—Wendy Doniger, Mircea Eliade Professor of the History of Religions, University of Chicago

“Solidly based on over a decade of fieldwork, Gutschow successfully dispels a number of stereotypical misconceptions about Buddhist monasticism in general and Buddhist nuns more specifically. She places monasticism in its necessary political and economic spheres, while not ignoring the pragmatic aspects of lived Buddhism. Being a Buddhist Nun transports women and nuns from their marginal peripheral position in Buddhist history to its ideological center.”—Frank J. Korom, Boston University

“A brilliant analysis, beautifully written, of Buddhism as never before portrayed. Privileging popular practices and local informants over textual expertise, Gutschow takes us right into the heart of the contradictions between Buddhist doctrine and practice, showing the mechanisms that reinstate the very social hierarchies and injustices that the Buddha disdained. The book is a tour de force, a bold and courageous analysis that will change the field of Buddhist studies forever. A truly enlightening and extraordinary book.”—Unni Wikan, University of Oslo