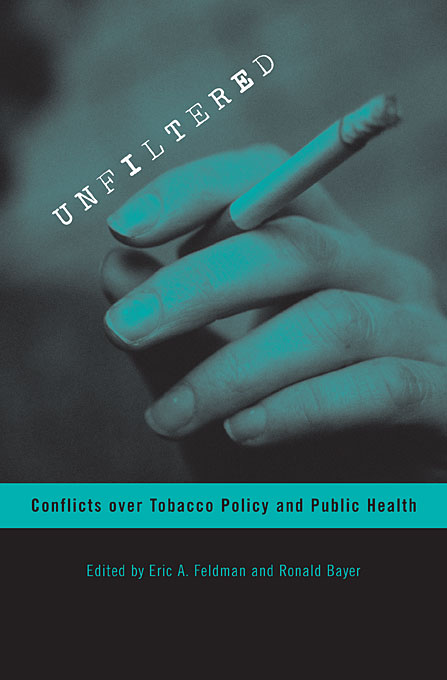 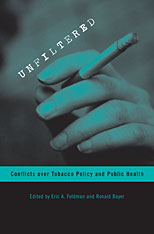 “Unfiltered may provide useful background as other public health epidemics associated with multinational corporations are addressed. This new book and other sources document the product features and industry actions that led to an epidemic and the need for multiple control strategies that are framed appropriately for the national context. Those concerned with limiting obesity, diabetes, and cardiovascular disease arising from unhealthful food consumption driven by multinational corporations will likely find many parallels in tobacco.”—Jonathan Samet, JAMA

“In this collection of eight national analyses and a perspective on the European Union, a timely story is told from different cultural and political points of view, including those of liberal democracies, where respect for the rights of individual persons must be balanced against collective efforts to support the public good through political action. Each chapter in this thoroughly referenced book delves into history, sometimes as far back as 500 years, to gain insights into which policies might be responsible for progress in the countries discussed. Furthermore, the book tries to explain why so many idiosyncrasies exist in the complex world of tobacco control.”—Thomas E. Novotny, The New England Journal of Medicine

“With the cover befitting a crime thriller, Unfiltered delivers an honest, unfiltered discussion of contemporary policy debates in tobacco control. The book documents experiences from eight developed countries… The contributors unravel their countries’ arduous journeys into tobacco control. A meticulous discussion is provided on how they confronted three key policy issues: advertising controls; restricting public smoking; and tobacco tax… Unfiltered concludes that appropriate policy alone is rarely sufficient to bring about fundamental change in the social patterns that facilitate starting, continuing, or ceasing to smoke. Tobacco control advocates will be confronted with thought provoking questions on the relation between national policies and individual preferences, between legal regimens and social realities. All eight countries show declines in smoking prevalence… Verdict: a must read for public health advocates, researchers, and policymakers.”—M. Assunta, Tobacco Control

“Unfiltered explores the roots and implications of increasingly restrictive international tobacco regulation through case studies of eight industrialized nations and essays analyzing political, economic, and legal forces. The essays reveal differences among countries’ understanding of public health, conceptions of freedom of expression, and tolerance for risk-taking behaviors that also harm others… This volume goes well beyond public health policy debates of personal behavior versus the common good.”—W. E. Foegelle, Choice

“I found Unfiltered to be very informative, logically organized, and well-written. It has long been known that tobacco consumption accounts for the largest single proportion of deaths and nearly half of those are considered preventable. It has only been the last half century that societies have taken seriously the need to protect the collective public health from the physical harms of smoking. Readers of this volume will understand all of these issues better.”—James Curran, Dean and Professor of Epidemiology, Emory University School of Public Health

“Unfiltered chronicles the ambivalence and diversity with which democracies reconcile the need to respect smokers’ rights and dignity with the need to prevent millions of smoking-related deaths. Both tobacco control advocates and their libertarian critics will find something to cheer about in Unfiltered. The stories told—about the necessity and the perils of paternalism, the role of class, expertise, and interest group politics in shaping health policy—surely have broader application. I know of no similar book-length comparative study of tobacco policy across wealthy societies.”—Harold Pollack, University of Chicago

“Unfiltered adds a singular contribution to the literature of tobacco control. In a wide-ranging, cross-national study, the volume offers invaluable insights into the historical, cultural, and institutional dimensions of tobacco policy as it has evolved over the past half-century—with notable sensitivity to the nuances among the eight nations examined. Essential reading for observers of the tobacco control landscape in the United States and abroad.”—Robert L. Rabin, A. Calder Mackay Professor of Law, Stanford University

“By placing tobacco policy into a broad international comparative framework, Unfiltered has rendered the tobacco control community a significant service. The book raises important questions about the politics of public health in liberal democracies: the role of corporate power and influence; the duty of government to protect citizens from toxic products; the tension between that duty and individual rights and preferences; and the interplay among science, political values, and policy making. Readers of Unfiltered will come away with a deeper appreciation of these issues and about the politics that swirl around efforts to protect the public health.”—Ken Warner, Avedis Donabedian Distinguished University Professor of Public Health and Director of the University of Michigan Tobacco Research Network