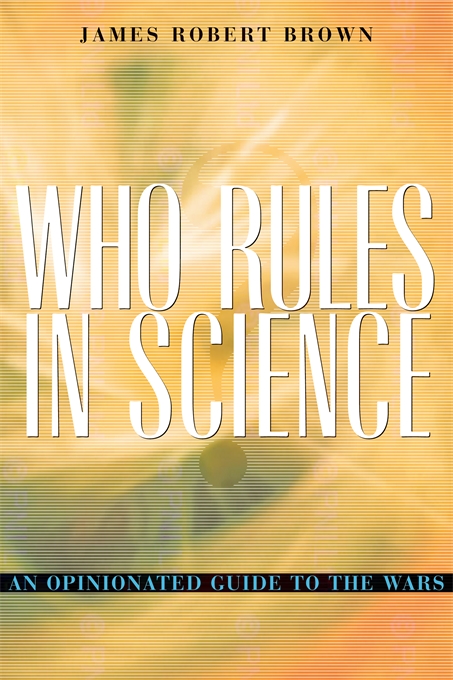 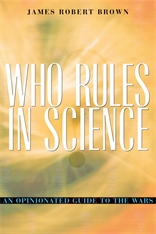 Who Rules in Science?

An Opinionated Guide to the Wars

“Meaty and challenging are the words to describe Brown’s treatment of the arguments that go on over the nature and social impact of science. ‘The battleground in the current round of the science wars,’ he writes, ‘is epistemology (What is evidence? Objectivity? Rationality? Could any belief be justified?)’ …The stakes are political, however; social issues are constantly lurking in the background. How we structure and organize our society is the consequence. Whoever wins the science wars will have an unprecedented influence on how we are governed. Brown, professor of philosophy at the University of Toronto, gives a rich and closely reasoned discussion of the issues in the science wars.”—Scientific American

“Many readers will finish James Robert Brown’s Who Rules in Science? Feeling that this ‘war’ is more than a little phoney… The idea that these two schools are at ‘war’ serves only to deflect attention away from their furtive collaboration. Who Rules in Science? sheds overdue light on this dark and secret liason.”—David Hawkes, The Times Literary Supplement

“In Who Rules in Science, James Brown…warns that there’s much more at stake here than people realize. This is not just a battle between postmodernist philosophers and working scientists over whether an electron is real or merely a social construction. It’s about who gets to define reality, truth and rationality.”—Sheilla Jones, The Globe and Mail

“In Who Rules in Science?, philosopher James Robert Brown argues cogently for public accountability for science—and public funding for scientists. He points out that debates about what science is, its control and its funding are not esoteric; they are the essence of the politics of science.”—New Scientist

“The latest and perhaps most comprehensive attempt at rescuing the pro-science ‘hard’ Left from the anti-science cons Left is James Robert Brown’s Who Rules in Science. Like Sokal, Chomsky, Stephen Jay Gould, Richard Lewontin, and others he believes that clear thinking is the Left’s best weapon, and that good science is a powerful engine of social justice. Thus, constructivism, which undermines the authority of science and reason, is not only wrong-headed but also socially irresponsible.”—Kevin Shapiro, Commentary Magazine

“Although opinionated, Who Rules in Science? is one of the least distorted and most generous surveys of the often bitter confrontations in the science wars. Brown’s exposition of the ideas and significance of Thomas Kuhn and David Bloor are particularly well done. But Brown’s crisp and accessible survey of the various factions in the analytic philosophy of science and the sociology of knowledge is a prolegomenon to his main theme: the role of power, authority, and politics in modern science.”—Martin Fichmann, History and Philosophy of Life Sciences

“James Brown…details in this very readable book the Great Divide between the humanities and science, and between constructivist and empirically oriented camps… For those who are quite comfortable with the standard approach in science, Who Rules exposes a very unpleasant underbelly of science, in which scientists can be influenced by personal or political motivations.”—Keith Harris, Metapsychology

“While what has been known as ‘the science wars’ seems to have finally played itself out—not, so much as I can tell, that distrust between the sciences and humanities has been settled, but that interest on the part of spectators has pretty well waned—the issues that animated the debate, and their practical importance in everyday life, may not have been successfully clarified for the general public. James Robert Brown’s Who Rules in Science? is the clearest, most accessible book on the subject for the general reader that I have come across during the many years of this bickering.”—Tom Bowden, TechDirections

“Brown…here provides a cheerful gloss on some philosophical issues arising from the currently fashionable ‘science wars.’ The result is a readable survey of the history of the analytic philosophy of science and the sociology of knowledge from positivism to constructivism, with the positions of the usual suspects characterized and criticized.”—P. D. Skiff, Choice

“A close analysis of the ‘science wars’ examines the link between politics and epistemology. Brown does an admirable job of engaging the general reader in such issues as the role that science plays in creating or changing the social order and the role of social factors in the creating or changing of scientific theories… The author takes readers through a whirlwind course in the philosophy of science in the 20th century, focusing on the concepts of realism, objectivity, and values. He acknowledges that social constructivists are right in seeing social factors at work in science, but he insists that reason and evidence play a dominant role. Brown sees the democratization of science as one of the central themes of the science wars, and he takes the position that when participants are drawn from every affected social group, more objective science will result. He argues that knowledge grows through comparative theory assessment, and that the way to ensure the optimal diversity of rival theories is by having a wide variety of theorists from diverse backgrounds; thus the political act of affirmative action leads to more objective science. Brings the science wars home for the lay reader by identifying the combatants, examining their goals, and exposing the strengths and weaknesses of their arguments.”—Kirkus Reviews

“Brown ably takes on many of the claims proffered by the antiscience camp and argues that the logic in those claims is faulty. Brown’s engaging style makes accessible complex issues central to the philosophy of science.”—Publishers Weekly

“A breath of commonsense, lucidly and wittily argued.”—Robin Dunbar, author of Gossip, Grooming, and the Evolution of Language and The Trouble with Science

“This is a wonderful book: funny, learned, intelligent, strong-minded. In a clear and understanding fashion, James Robert Brown introduces us to the battles over the nature of science. He is never afraid to make judgements, yet always with appreciation of people’s positions, however extreme. If you read only one book on the ‘Science Wars,’ read this. My only regret is that Who Rules in Science? is not longer.”—Michael Ruse, Florida State University

“Who Rules in Science? restores the image of the scientist as a rational actor, capable of generating reliable knowledge and defending the public interest. The book is wonderfully written and should be read as widely as possible.”—Ullica Segerstrale, author of Defenders of the Truth

“This book is a lively, engrossing overview of the philosophical and political issues at stake in the current debates about science. Brown doesn’t pull any punches in stating his own views, but he always takes care to present fairly even those arguments with which he disagrees. And he’s an equal-opportunity debunker: scientists, sociologists and his fellow philosophers all come in for (mostly justified) criticism.”—Alan Sokal, coauthor of Fashionable Nonsense