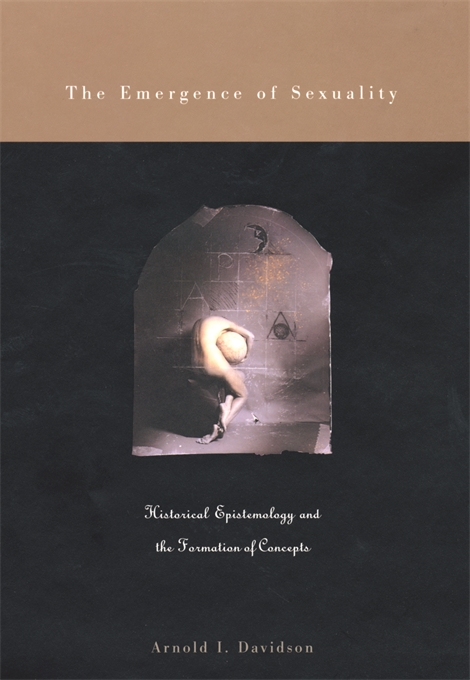 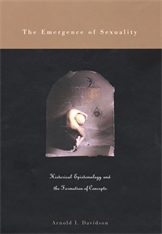 The Emergence of Sexuality

Historical Epistemology and the Formation of Concepts

“No one of his generation has better mastered Foucault’s archeological and genealogical work than Davidson. I do not mean in saying so that he is an expert on Foucault (which he is) but rather that he has learned how best to do his own work having seen what Foucault could do.”—Ian Hacking, Common Knowledge

“Davidson’s work is one of the most significant applications of Foucault’s (and in part Georges Canguilhem’s) ‘historical epistemology’ to the development of psychiatric thinking about sexuality. Not only are the chapters written with style and wit, but they explicate some of the most important problems faced by any historian of medical knowledge, particularly historians of psychiatry. No historian of sexuality can afford not to pay close attention to Davidson’s work. The first five chapters might be characterized as the application of theory: they are detailed, brilliant, and insightful essays about sex and sexuality, about how new styles of reasoning come into being, and about how we came to be sexual beings. The remaining chapters might be considered a profound exegesis of Foucault’s archeological methodology, and indeed a part of their radiance comes from Davidson’s reinterpretation of Foucault’s works of his ‘middle period.’”—Ivan Crozier, Medical History

“In presenting his account of historical epistemology (tracing the ways concepts are modified as conditions of objectivity and forms of subjectivity change each other), Arnold Davidson takes as a pivotal task the confrontation of Foucault’s writing (to the totality of which Davidson is a world-renowned guide) with that of Freud (on whose Three Essays on Sexuality he has produced ground-breaking work), along the way showing the pertinence to his project of Wittgenstein’s Philosophical Investigations. A growing body of students and specialists in philosophy, and cultural studies, and the history of science, in particular of psychiatry, have been profiting from Arnold Davidson’s clarity and his stunning erudition for a couple of decades now. This initial selection of his essays is an excellent introduction to his singular array of scholarly and critical accomplishments.”—Stanley Cavell, Professor Emeritus, Harvard University

“Arnold Davidson’s essays revive the adventurous roots of that genre as a daring venture or trial. The result is a new and stimulating hybrid of history and philosophy—historical epistemology—which does full justice to the otherness of the past without losing sight of the structures and rules of coherence that forge concepts worthy of the name.”—Lorraine Daston, Max Planck Institute for the History of Science

“An extraordinary collection of papers that will constitute a book of lasting value for the history of science, the history of medicine and psychiatry, critical theory, and philosophy. Arnold Davidson has accomplished what many have tried and practically none successfully accomplished: he has found a way to write of and through both the analytic tradition in philosophy and the continental concern with épistémologie. People may well turn to this book as a source about the emergence of sexuality, the nature of historical argumentation, the nature of ‘monstrosity,’ ‘perversion,’ or the interpretation of Foucault. But in my view it is really about the nature of concepts: as such, it offers one of the most sustained, interesting and novel attempts to join the analytic and historical dimensions of the ‘concept’ problem that we have in the last fifty years.”—Peter Galison, Mallinckrodt Professor of the History of Science and Physics, Harvard University

“I think of him as one among a very small handful of scholars in the history of sexuality whose work is invariably rigorous in the best sense, both conceptually precise and empirically informed, and for that reason, not only worth reading but worth the closest attention. Davidson’s unique contribution consists in a precise analysis of thought-in-action, of the logics embedded in human practices, the immanent philosophy of cultural systems. It is Davidson’s signal achievement to have been able to bring those heterogeneous considerations together in a unified analysis without sacrificing either a precise philosophical specification of the content of the particular ideas and their internal relations or a complex understanding of the concrete historical and cultural conditions that determine their meaning and application.”—David Halperin, University of Michigan