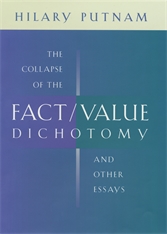 The Collapse of the Fact/Value Dichotomy and Other Essays

If philosophy has any business in the world, it is the clarification of our thinking and the clearing away of ideas that cloud the mind. In this book, one of the world’s preeminent philosophers takes issue with an idea that has found an all-too-prominent place in popular culture and philosophical thought: the idea that while factual claims can be rationally established or refuted, claims about value are wholly subjective, not capable of being rationally argued for or against. Although it is on occasion important and useful to distinguish between factual claims and value judgments, the distinction becomes, Hilary Putnam argues, positively harmful when identified with a dichotomy between the objective and the purely “subjective.”

Putnam explores the arguments that led so much of the analytic philosophy of language, metaphysics, and epistemology to become openly hostile to the idea that talk of value and human flourishing can be right or wrong, rational or irrational; and by which, following philosophy, social sciences such as economics have fallen victim to the bankrupt metaphysics of Logical Positivism. Tracing the problem back to Hume’s conception of a “matter of fact” as well as to Kant’s distinction between “analytic” and “synthetic” judgments, Putnam identifies a path forward in the work of Amartya Sen. Lively, concise, and wise, his book prepares the way for a renewed mutual fruition of philosophy and the social sciences.