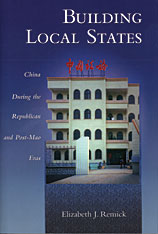 China during the Republican and Post-Mao Eras

This book examines two eras of Chinese history that have commonly been viewed as periods of state disintegration or retreat. And they were—at the central level. When reexamined at the local level, however, both are revealed as periods of state building. In both the Nanjing decade of Guomindang rule (1927–1937) and the early post-Mao reform era (1980–1992), both national and local factors shaped local state building and created variations in local state structures and practices. This book focuses on one key area of the state, taxation and public finance, to trace the processes of local state building in these two eras. Using the records of local tax and finance offices in the Tianjin area and in Guangdong province, the author maps the process by which these county-level offices grew.

This book highlights variation in local state structures and practices between localities and between the central and local governments. As the author shows, this variation is important because it results in regional differences in state–society relations and affects central state capacity in terms of the local state’s ability to implement central state policies as well as its own.