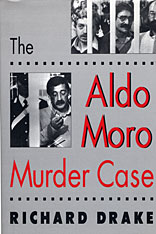 “Mr. Drake’s book will serve as a healthy antidote to [the conspiracy theories that abound in Italy about the Aldo Moro murder case]…he has performed the valuable service of sifting through the gargantuan documentation of four different trials and numerous parliamentary investigations into the Moro affair that took place between 1982 and 1994… Mr. Drake obviously has an excellent grasp of his material.”—Alexander Stille, The New York Times Book Review

“Drake’s account is inevitably compressed, but it is insightful…[he] examines the convoluted evidence with extreme care.”—George Steiner, The New Yorker

“‘By abducting the Republic’s most prominent leader, the Red Brigades hoped to plunge the political establishment into a crisis that would lead to its collapse.’ That didn’t happen, but as this sober and thoughtful book so carefully explains, it could well have. And in a world where traditional democracies increasingly face the threat of terrorism, who knows what’s around the corner?”—The Washington Post Book World

“Richard Drake…brings a historian’s passion for research to his chronicle of the Christian Democratic leader’s kidnapping and death… In the course of describing and disputing various conspiratorial theories that have persisted since 1978, he explains the Italian judicial system, offers a short course on the Christian Democratic party and Moro’s place in it, and discusses half a dozen influences on Italian policy—the Vatican, the Mafia, the U.S., secret right-wing military and masonic orders, and foreign intelligence and terrorist organizations.”—Michael Mewshaw, New Statesman & Society

“Richard Drake, author of the excellent The Revolutionary Mystique and Terrorism in Contemporary Italy (1989), is one of the few men in North America who really understands the revolutionary left in Italy… For Italian history enthusiasts…his story is an exciting one… Just as the American public has never quite accepted Lee Harvey Oswald’s responsibility in the Kennedy assassination, Italians have always wondered if the real responsibility for Moro’s death has been assigned… Drake argues convincingly that the verdict is in… There was a murder, but there is no longer a mystery.”—Richard O. Collin, American Historical Review

“There is not a scandal in Italian political life, between the end of the 1970s and the beginning of the 1990s, that was not used in some way to explain the motives for the [Moro] kidnapping and murder… Even today, Italian political literature still lacks a serious, detached, and neutral work on this subject… In this state of affairs, Drake has played a role akin to that of the foreign mayors invited to govern Italian cities in the Middle Ages whenever the factions of the cities were unable to decide on a communal government. In order to carry out his task with precision and objectivity, Drake studied the Italian judicial system, read thousands of documents, consulted the newspapers and media reports of the time, took part in some of the hearings at the last trial, and personally interviewed several magistrates. The result is an exemplary book or, if you prefer, a pathway that gradually unfolds through a jungle of emotion, theses, and polemics.”—Sergio Romano, Journal of Modern History

“Richard Drake offers here a precise reconstruction of the times and the events [of the Moro murder case], giving ample space to the parliamentary inquiries and the judicial trials that followed the assassination… [He] analyzes ‘the elements of extremism and violence in our culture…as a way of penetrating and seeing more clearly inside our labyrinthine democracy and its relationship with the mafia…and the other Western Powers.’”—Franco Borelli, Oggi

“Richard Drake’s The Aldo Moro Murder Case is, by its very nature, a fascinating book. It has all the elements of a great story: murder in high places, whodunit, conspiracy, collective obsessions, international intrigue. As the author points out, the Moro case is also a milestone in contemporary Italian history. Moro gave the name to a period, and the Moro case—like the Kennedy assassination in this country—won’t let go of the Italians, even today.”—Claudio Segre, The University of Texas at Austin