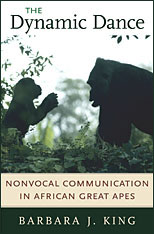 “In this engaging account of her personal scientific journey, Barbara King discovers the fundamental insight that the common ancestral ground between humans and great apes is the ability to engage in creative communication in which meaning emerges dynamically as individuals co-regulate. This creative ability is the foundation of all forms of communication, including gesture and language, in apes and humans.”—Alan Fogel, University of Utah

“In The Dynamic Dance, Barbara King extends an irresistible invitation to students of animal behavior to explore communication in African great apes, not just by listening, but by watching. This beautifully written book argues that, just as Piaget was able to understand much about nonverbal human children by watching them in their worlds, much can be learned about the social lives of great apes from tracking the small adjustments they make to one another as they go about their daily lives. And the book raises the interesting possibility that human ways are not the only ways for sentient socio-emotional creatures to interact.”—Susan Goldin-Meadow, author of Hearing Gesture

“In this most important book Barbara King asks us to rethink many of our most basic assumptions about communication in great apes, their social lives, and their cognitive abilities. Rather than focusing on individual displays, she argues persuasively for the detailed study of how multiple animals construct action together through continuous, and quite subtle, co-regulation. Very young infants, through activities as mundane and pervasive as working with adults to be carried, enter a social world in which they quickly learn that their body movements are being organized with reference to the embodied behavior of others. The Dynamic Dance offers a detailed picture of a primordial form of sociality in which meaning and consequential social action are constructed not by a single individual but instead interactively through embodied multiparty, multimodal sequences of action. The book correctly refuses to place special emphasis on a limited class of behaviors that might seem to shed light on human cognition and language. Indeed I find the call for more detailed study of Mother–Infant Behaviors, and of whatever activities the animals themselves treat as relevant, most important. Precisely by doing this The Dynamic Dance sheds crucial light on the social matrix within which sign systems such as human language, evolved. I found a deep resonance with her approach and my own research on how utterances are constructed not by a speaker alone, but rather through sequences of interaction in which the embodied displays of hearers and speakers, the contingent participation frameworks that they constantly renegotiate, play a crucial role, and can in fact lead to a reshaping of emerging sentences. This is a most original and important book that should be of interest to anyone interested in how primates build meaning and action in concert with each other.”—Charles Goodwin, University of California, Los Angeles

“The meaning of a dance lies not in the specific steps involved, but rather in the flow of movements of two individuals over time, how they tune into one another, adjust to the other or even anticipate the other’s next move. Similarly, Barbara King argues that to understand great ape communication we must go beyond the specific signals emitted to focus on the continuous mutual adjustments in bodies, gestures, and facial expressions that characterize most ape social interactions. In her view, meaning emerges out of such mutual and contingent actions; it is always co-created. Detailed, narrative examples from her observations of great ape groups help the reader see how meaning can emerge from an ongoing stream of behaviors by two or more apes. King’s highly original approach increases our ability to detect the complexity, subtlety, variability, and creativity of ape communication. It may also bring us one step closer to understanding how human language could have evolved from the non-linguistic communicative systems shared by the common ancestor of great apes and humans.”—Barbara Smuts, author of Sex and Friendship in Baboons