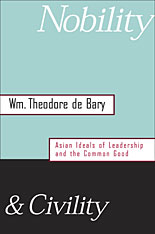 Asian Ideals of Leadership and the Common Good

Globalization has become an inescapable fact of contemporary life. Some leaders, in both the East and the West, believe that human rights are culture-bound and that liberal democracy is essentially Western, inapplicable to the non-Western world. How can civilized life be preserved and issues of human rights and civil society be addressed if the material forces dominating world affairs are allowed to run blindly, uncontrolled by any cross-cultural consensus on how human values can be given effective expression and direction?

In a thoughtful meditation ranging widely over several civilizations and historical eras, William Theodore de Bary argues that the concepts of leadership and public morality in the major Asian traditions offer a valuable perspective on humanizing the globalization process. Turning to the classic ideals of the Buddhist, Hindu, Confucian, and Japanese traditions, he investigates the nature of true leadership and its relation to learning, virtue, and education in human governance; the role in society of the public intellectual; and the responsibilities of those in power in creating and maintaining civil society.

De Bary recognizes that throughout history ideals have always come up against messy human complications. Still, he finds in the exploration and affirmation of common values a worthy attempt to grapple with persistent human dilemmas across the globe.