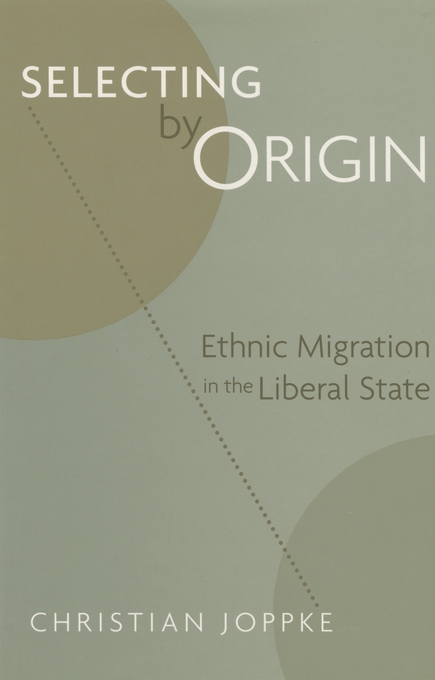 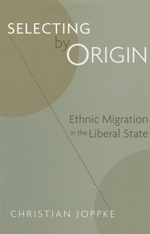 Ethnic Migration in the Liberal State

“This is an impressive and important book. Joppke’s analysis ischaracterized by a wealth of empirical detail and nuance (impossible to convey in a short review such as this), yet he never loses sight of the bigger picture and manages to link together a wide range of cases into a coherent argument. Selecting by Origin is at once an exemplary comparative historical analysis and a powerful contribution to theoretical debates about ethnicity in the liberal state.”—James Hampshire, American Journal of Sociology

“A benchmark study that makes a convincing case for both the main flows of convergence theory and the eddies of ethnic policies.”—Thomas Janoski, Contemporary Sociology

“It is hard not to be swept along by this brilliantly argued and constructed text.”—Adrian Favell, European Journal of Sociology

“This is a powerful book. What Joppke has achieved is both impressive and timely, as he tackles in a superb fashion issues that speak to a variety of literatures and research traditions in migration studies. Selecting by Origin has all the ingredients to become a focal point book in several literatures… Methodologically, the study is an excellent model of interdisciplinary research: a combination of sociology, legal studies, comparative historical politics and international relations. Joppke also shows an insatiable appetite for data from which the reader benefits greatly… All in all, he provokes, he challenges, and he argues, with force.”—Philippe Bourbeau, International Affairs

“No brief summary of these cases could do justice to the complexity and nuance of Joppke’s argument, which everywhere displays an impressive mastery of legal and other sources… A tour de force and a marvelous read.”—Richard Alba, International Migration Review

“A timely intervention into the highly charged question of ethnicity and its proper role in citizenship and immigration regimes… Joppke unpacks the justifications, selection mechanisms, and oppositional pressures surrounding ethnic immigration in liberal states. Eschewing the ethnic/civic dichotomy that has dominated these debates, Joppke develops ‘nationhood’ and ‘liberal stateness’ as the variables that serve to explain how much preference for ethnic immigration a particular liberal democracy will show.”—David Abraham, Journal of Modern History

“This trenchantly argued exploration of the ways in which states use ethnicity to select among potential immigrants elucidates a basic tension between the universalist commitments of liberal democratic nation-states and the inescapable particularity of their histories, cultures, and populations.”—Rogers Brubaker, University of California, Los Angeles, author of Ethnicity without Groups

“This well-written book makes a major contribution to scholarship about immigration and liberal democracy. Joppke succeeds in doing two things outstandingly well. First, he provides a cogent theoretical argument about the nature of ethnic migration and how it has changed over time, and the constraints now confronting any efforts to shift government policy towards greater selectivity, even though such illiberal pressures endure and are often created by liberal governments. Second, he provides a detailed and informed empirical account, rooted in comparative, historical analysis, of the three types of ethnic migration.”—Desmond King, Oxford University, author of Making Americans: Immigration, Race, and the Origins of the Diverse Democracy