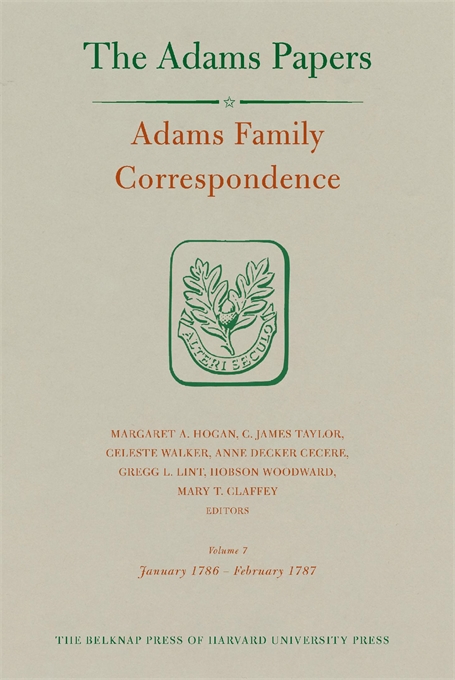 This volume continues the incredible family saga of the Adamses of Massachusetts as told through their myriad letters to one another, to their extended family, and to such other notable correspondents as Thomas Jefferson and Mercy Otis Warren. The book opens in January 1786, when John and Abigail resided at Grosvenor Square in London, partaking of the English social scene, while John made slow progress on negotiations for an Anglo-American commercial treaty. Daughter Abigail (“Nabby”), also in London, had begun a courtship with William Stephens Smith that would culminate in their marriage in June 1786. Back in Massachusetts, John Quincy had rejoined his brothers Charles and Thomas, entered Harvard College, and begun to make preparations to study law.

Writing back and forth across the Atlantic, the Adamses interspersed observations about their own family life—births and deaths, illnesses and marriages, new homes and new jobs, education and finances—with commentary on the most important social and political events of their day, from the scandals in the British royal family to the deteriorating political situation in Massachusetts that eventually culminated in Shays’ Rebellion. As in the previous volumes in this series of the Adams Papers, the correspondence presented here offers a unique perspective on the eighteenth century from a preeminent American family.