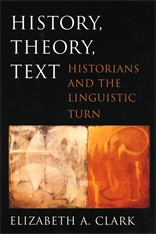 Historians and the Linguistic Turn

“I come to [review this work] neither as a historian nor as a scholar of late antiquity, but as a literary historiographer who has never had the good fortune to find a really clear, richly-documented survey and analysis of contemporary literary theories as they bear on the practice of writing history. Not, that is, until now. History, Theory, Text offers practicing historians and historiographers alike an overview of what they do, and a challenge for how they (might) do it… [Clark’s] generous approach to other scholars’ work; her lucid exposition of the most difficult theory; and her own enthusiasm for her subject makes this book unputdownable. I hope that those historians of premodernity who have not yet picked it up, will do so.”—C.S. Kraus, Bryn Mawr Classical Review

“Elizabeth Clark’s History, Theory, Text: Historians and the Linguistic Turn is a brave and fascinating undertaking. It is a valuable contribution to both historians and philosophers alike—historians looking to understand how history can benefit from the work of philosophers, and philosophers who wish to understand the ways in which their theories can be applied to other disciplines. Likewise, as a fair and balanced lesson in historiography, this book is an excellent source for students learning the role of professional historians and the ways in which the academic disciplines have interacted in the last century.”—Georges-Claude Guilbert, Cercles

“History, Theory, Text offers a survey of the debates that have surrounded the discipline of history from the late-nineteenth up to the twenty-first century… This work certainly makes a valuable ‘contribution’…to the short list of the studies in which trade historians look at the debates surrounding their own practice. The book should thus appeal to Clark’s colleagues, as well as to scholars in the humanities whose specialty is undergoing the same predicaments as history. But Clark’s survey is also useful because it bears witness to the difficulty of calling for more theory and living by one’s own standard—the difficulty of being ‘theoretical enough.’ Clark’s work, in this respect, is most representative, for it testifies to the efforts of a scholar who, with much spirit, attempts to negotiate the requirements of being ‘theoretical’ with those of being ‘user-friendly.’”—Philippe Carrard, Clio

“Clark’s self-described ‘user-friendly survey’ of nineteenth- and twentieth-century historiography is successful enough at two tasks to warrant a new label for its style: the expository polemic. The book’s success as an expository work is straightforward. Clark takes the new reader smoothly but carefully through over a hundred years of historiographical innovation and conflict, leaving the reader feeling oriented rather than overwhelmed. More knowledgeable readers can engage the voluminous conversation in the endnotes (a hefty 125 pages of notes for 185 pages of text) to appreciate the finer details of the narrative… Beginning with Ranke, and moving through structuralist linguistics, narrative, hermeneutics, and poststructuralism, the reader is swept along with the narrative logic of the story and left with the sense that there can simply be no return to objectivist history, and further that intellectual rigor is not sacrificed in the process. Clark’s expository polemic is a fruitful reading for, quite simply, anyone interested in history.”—Boyd Blundell, Religious Studies Review

“Each chapter focuses on an issue of historiographical significance (though not always within the realm usually considered that of ‘theory’), and any could be used easily in a graduate or an undergraduate historiography seminar as a source for bibliography and as a structure for discussion… To many readers, Clark’s account of the literature of post-structuralism will be familiar and persuasive, but most compelling are her digressions into the ways in which an understanding of ancient theology may change how we view what is called theory.”—Daniel Rosenberg, Histoire Sociale/Social History