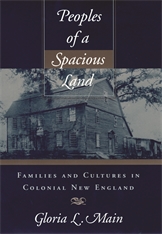 Peoples of a Spacious Land

In this book about families—those of the various native peoples of southern New England and those of the English settlers and their descendants—Gloria Main compares the ways in which the two cultures went about solving common human problems. Using original sources—diaries, inventories, wills, court records—as well as the findings of demographers, ethnologists, and cultural anthropologists, she compares the family life of the English colonists with the lives of comparable groups remaining in England and of native Americans. She looks at social organization, patterns of work, gender relations, sexual practices, childbearing and childrearing, demographic changes, and ways of dealing with sickness and death.

Main finds that the transplanted English family system produced descendants who were unusually healthy for the times and spectacularly fecund. Large families and steady population growth led to the creation of new towns and the enlargement of old ones with inevitably adverse consequences for the native Americans in the area. Main follows the two cultures into the eighteenth century and makes clear how the promise of perpetual accessions of new land eventually extended Puritan family culture across much of the North American continent.