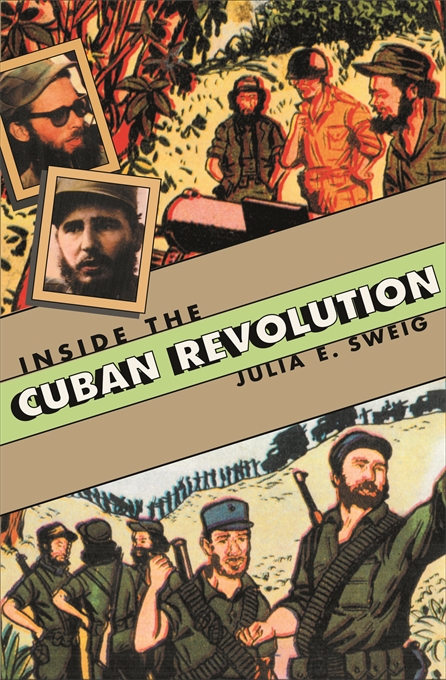 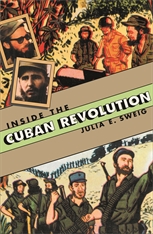 Inside the Cuban Revolution

Fidel Castro and the Urban Underground

“In a thoughtfully argued and carefully researched book, Sweig…provides what will almost certainly be the standard account of the Cuban insurrection for years to come. Using a wide range of archival records and manuscript sources, including important Cuban materials, Sweig successfully explores the complex and often contradictory relations between the llano and the sierra. She pays attention more to similarities than to differences and, by emphasizing collaboration and coordination, provides a coherent and cogent explanation of the astonishing success of Castro’s movement. Keenly aware of the larger historical context which gives her tale meaning, Sweig shows how Castro held together the disparate elements of his often-fractious movement while providing considerable insight into his personality and the politics that often divided his followers.”—Louis A. Pérez, The Los Angeles Times Book Review

“This is not a military history, but it is the best book ever written about Fidel Castro’s revolutionary movement… Unlike the great body of preexisting literature on the subject, Sweig’s work is thoroughly professional and based primarily on archival sources in Cuba, to which she had unprecedented and almost unrestricted access… Written with style, insight, and clarity, Julia Sweig’s landmark study, now available in paperback, cannot be ignored by any serious student of the Cuban Revolution.”—Neill Macaulay, Military History

“Using original documentary sources from Cuban government archives, Sweig shows how the largely middle-class Cubans in the urban underground laid the groundwork for Castro’s Rebel Army victory… Sweig claims that the full history of the revolution has yet to be written, but her book makes an impressive contribution to this effort by painting a new and more realistic picture of the process that produced Castro’s Cuba.”—Susan Kaufman Purcell, Foreign Affairs

“The sheer volume of material she was able to review is astounding.”—Mark Falcoff, The Times Literary Supplement

“Julia Sweig’s book, the result of eight years of research with access to newly declassified documents, exposes the myth that the Cuban revolution was imposed by a dozen middle-class, bearded rebels in the mountains and challenges three pieces of conventional wisdom… This book is vital for anyone interested in understanding the Cuban revolution, and it destroys the arguments of those British Trotskyists who deny its working class character.”—Helen Yaffe, Fight Racism and Fight Imperialism

“Julia Sweig has written a carefully crafted account of the urban underground campaign against Fulgencio Batista, the dictator toppled from power in 1959. The main interest of the book is that it is primarily based on original interviews and previously inaccessible records of the 26th July Movement—the revolutionary nationalist organization created by Castro.”—Financial Times

“In this book, Julia E. Sweig attempts to debunk one of the many pillars of the mythology surrounding the Revolution, namely that Fidel Castro, his brother Raúl, Ernesto ‘Che’ Guevara, and a few other guerilla fighters stationed in the Sierra Maestra were the primary force that brought down Batista and had a dominant influence over revolutionary activities beyond the Sierra Maestra, including the urban settings… The picture produced by this book is one in which 26th of July leaders, operating outside the Sierra Maestra, played protagonist roles within the insurrection and that much of the initiative and many of the key actions emerged from the llano (lowlands)… [S]he supports this thesis with documentary sources heretofore unavailable to scholars. The bulk of the documentary evidence sustaining the book consists of hundreds of documents housed at the Cuban Council of State’s Office of Historic Affairs, which the Cuban government made available to Sweig while keeping the archive’s doors closed to other researchers. This valuable and fascinating collection of documents allowed the author to paint a well-documented and nuanced perspective on llano–sierra relations as well as how the leaders of the 26th of July Movement related to other anti-Batista figures… Sweig’s book is an important and useful contribution for the understanding of the struggle against Batista.”—Luis Martínez-Fernández, The Historian

“The recent opening of Cuban historical archives to non-Cuban scholars has changed traditionally accepted views of the Cuban revolution of 1959. Using documents housed in the Cuban Council of State’s Office of Historic Affairs, Sweig…argues that in its early days the revolution was influenced more by the Cuban middle class and less by Fidel Castor or Che Guevara than historians have suggested… By giving this period context and highlighting its importance, Sweig shows that all the elements of the revolution were in place prior to 1959… [It is] convincingly argued and now backed by documentary evidence. A valuable discussion.”—Mark L. Gover, Library Journal

“After so many books on the Cuban Revolution, it might seem impossible to shed new light on one of the key moments in the twentieth century. Yet Julia Sweig manages to do so in this remarkable tour de force. Using documents only recently made available to her by the Cuban authorities, she challenges several myths about the nature of the Cuban Revolution and in the process provides a nuanced and very readable account of the rise to power of Fidel Castro.”—Victor Bulmer-Thomas, Director, Royal Institute of International Affairs

“Inside the Cuban Revolution confirms what many had long suspected: the ‘official story’ of twelve bearded, daring guerrillas bringing down a hideous dictatorship never happened. Without the urban underground there would have been no victory. In this important book, Julia Sweig sets the record straight and raises fundamental questions about revolutionary movements in Latin America since 1959.”—Jorge G. Castañeda, Secretary of Foreign Affairs, Mexico

“This book is both compelling and groundbreaking. It seamlessly combines great storytelling, investigative journalism, and first-rate analysis in a work that scholars and policymakers—indeed, anyone interested in Cuba—will find must reading. With Inside the Cuban Revolution Julia Sweig guarantees the world will never look at Cuba or Fidel Castro the same way again.”—Senator Christopher J. Dodd, Chair, Western Hemisphere Subcommittee, Committee on Foreign Relations

“With meticulous research, presented in a dramatic narrative, Julia Sweig provides the real story behind the Cuban Revolution and Castro’s rise to power, showing that his ascendancy was due to far more than the popular conception of a small band of guerrilla fighters toppling a corrupt regime. It is a portrait of Castro as we’ve never seen him. Inside the Cuban Revolution, which sheds new light on the last time there was a transition of power in Cuba, may very well give us clues to the next one.”—Congressman Charles B. Rangel

“In this brilliantly researched tour de force, Julia Sweig adds a new dimension to our understanding of the way Fidel Castro came to power in Cuba.”—Arthur M. Schlesinger, Jr.